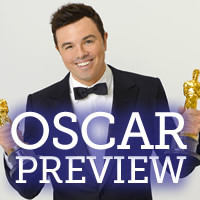 Will this year's Academy Awards be as anticlimactic as last year's, when experts were able to correctly predict 18 of the 24 Oscar categories (including every major award save for lead actress)? We'll know on Sunday night when Seth MacFarlane hosts the 85th Annual Academy Awards. The show will be broadcast live on ABC from Hollywood's Dolby Theatre at 8:30pm ET / 5:30pm PT, with the red carpet pre-show beginning at 7 ET / 4 PT.

Below, we've aggregated predictions from 40 entertainment writers and awards experts, and compared them to the votes cast by nearly 2,200 Metacritic visitors who voted in our 4th annual Oscar poll. Don't forget to check this site on Monday morning to see which users and experts were the most accurate; we'll also sample reviews of the broadcast itself from TV critics.

Everyone knows that Argo will collect Sunday's best picture trophy, becoming the first film since Driving Miss Daisy to win that honor without its director also being nominated. Or will it? If any film has a chance of scoring an upset victory, it is Silver Linings Playbook, thanks in part to the Academy's preferential voting system, which could reward a film sure to be included in most voters' top two or three films in the event that Lincoln siphons off enough of Argo's first-place votes. That is the argument made this week by pundits ranging from Roger Ebert to Huffington Post's Christopher Rosen to Forbes.com contributor Mark Hughes. (As for Lincoln itself? No chance, according to most experts, citing an apparent lack of enthusiasm for the film among Academy voters.)

Still, the award is certainly Argo's to lose, riding a wave of recent successes including Golden Globe, BAFTA, and Producers Guild wins for best picture. (It also helps that it's a movie about Hollywood itself, which certainly didn't hurt The Artist at last year's Oscars.) While Vegas sportsbooks do not accept wagers on the Academy Awards, bookmakers in the UK do, and most of them now have Argo as an overwhelming 1:7 favorite to win (by comparison, Lincoln is the second favorite at 5:1). Even a few statistics experts—hoping to become the Nate Silver of the entertainment industry, perhaps—have gotten in on the prediction game, with Harvard's Ben Zauzmer giving Argo a 60% chance of winning, while Canadian Ph.D. Iain Pardoe assigns the best odds to Lincoln, though even that film has just a 37% of being named best picture under his model. Meanwhile, the best-reviewed films of the bunch—Zero Dark Thirty and Amour—seem to have zero chance at Oscar love in the best picture category.

Thank's to Ben Affleck's absence, the director category is more unpredictable than would typically be the case with such a clear best picture frontrunner. While Lincoln's Steven Spielberg looks like he could collect his third directing trophy, many experts (including some UK bookmakers) give Life of Pi director Ang Lee a fighting chance.

Two of the acting categories are 100% locks and have been for months; if anyone defeats either Lincoln's Daniel Day-Lewis or Les Mis co-star Anne Hathaway, they will be considered one of the biggest upsets in Oscar history. In the lead actress category, Jennifer Lawrence has been—and still is—the presumptive favorite, though over the past week some experts have suddenly started to line up behind soon-to-be 86-year-old Emmanuelle Riva (Oscar's oldest ever best actress nominee), who could find herself with one heck of a birthday present on Sunday.

Only one of the four acting categories, however, seems to be wide open: supporting actor. Our users gave the edge to Christoph Waltz, while a plurality of experts felt that Academy voters would be unable to resist Robert De Niro's charms. And many pundits (and users) also gave Lincoln's Tommy Lee Jones an almost equal chance of winning, making this a three horse race. (In fact, many oddsmakers have Jones as the favorite, though some have better odds for Waltz.) Note that every nominee in the category has already won an Oscar, so sentimentality shouldn't play into the voting.

Here's where your best Oscar pool plans may start to go awry, as evidenced by the fact that our users and experts disagreed in both categories (nor could the experts even come to a consensus in one of them). The original screenplay category is shaping up to be a three-film race with no clear favorite, while the adapted screenplay field—much like best picture—has been reduced to a frontrunner (Argo) and a single secondary contender (Lincoln).

While a few experts are convinced that Pixar will triumph once again for Brave, it is fellow Disney release Wreck-It Ralph that has the most support from the pundits. In the animated short category, Paperman is the rare nominee to also receive an overwhelming majority of expert picks in what is usually a less predictable category. A clever black-and-white film set in 1940s New York, the latter is yet another Disney production, and it was the winner at this year's Annie Awards.

The crowd-pleasing Searching for Sugar Man appears to be a lock in the documentary feature category, while experts were divided in the short category, eliminating just one of the five films (interestingly, the one our users preferred) from contention. Of the two receiving the most expert votes, Open Heart follows a group of Rwandan children who require life-saving medical procedures, while Inocente examines a homeless immigrant teenager with dreams of becoming an artist. For what it's worth, note that the experts predicted neither documentary category correctly last year.

Could such an acclaimed film as Amour, which is already nominated for four other nominations, fail to win in the foreign-langauge category? While that seems unlikely, the Academy does have a history of making odd selections here, and voters often fail to pick the best film of the bunch. Still, all of those other nominations suggest that Academy voters do indeed like Michael Haneke's love story.

Predicting the live action short category is always a dicey proposition. Three of this year's shorts feature young protagonists; one of them, Curfew, stands as the favorite with experts, but don't entirely rule out Buzkashi Boys, which features a pair of young friends in present-day Afghanistan and whose two teen stars will be walking the red carpet on Sunday thanks to a well publicized fundraising campaign to fly them out from Kabul. Metacritic users, meanwhile, gave the edge to the Belgian film Death of a Shadow, a fantasy about a dead soldier given a second chance at life if he can capture the shadows of 10,000 people.

Adele's "Skyfall" (which she will perform during the ceremony) is a lock to become the first Bond theme in history to win an Oscar, while first-time nominee Mychael Danna, nominated in both music categories, is the favorite to win for his Life of Pi score.

The technical categories appear to be more settled than we are accustomed to, with clear favorites in many of the contests. Sound editing and makeup look to be the most problematic for your Oscar pool, though our users agreed with the experts in both instances.

The expert predictions compiled above come from the following sources: