Winners of the 69th Primetime Emmy Awards were announced Sunday night in Los Angeles in a ceremony televised live on CBS and hosted by Stephen Colbert. Hulu made a big splash by becoming the first streaming service to win the best drama series trophy for The Handmaid's Tale, which bested fellow newcomers Stranger Things and This Is Us in one of the evening's few hard-to-predict races. As expected, Veep and SNL were the big winners in the comedy categories (which also saw a strong showing from Atlanta's Donald Glover), while HBO's Big Little Lies dominated the miniseries awards.

HBO again led all networks with 29 total Emmy wins this year (including 10 tonight and 19 last week during the creative arts ceremonies). Netflix finished second with 20 trophies, followed by NBC—the top broadcast network—with 15. (NBC also had the most wins for any broadcast network a year ago, but its total then was just six.)

Below, find out what TV critics thought of Colbert and this year's Emmy telecast as a whole, and see which experts and users were the most accurate in their predictions this year. But before we get to that, here is a quick recap of the 2017 Emmy Award winners in each of the major categories (including some of the creative arts winners announced in a pair of ceremonies last weekend). A complete list of winners in every category can be found at the official Emmy website.

While many of the drama categories matched the expert predictions, the win for Handmaid Tale's Ann Dowd was a genuine surprise (including, it seems, to Dowd herself); though the category had no dominant favorite, most forecasts had Thandie Newton (Westworld), Chrissy Metz (This Is Us), or even Millie Bobby Brown (Stranger Things) as the likely winner. And while Handmaid's win for best drama series isn't technically a surprise, it was far from a sure thing. With usual favorite Game of Thrones out of the picture this year, the race was wide open, and many experts had predicted first-year hits Stranger Things (Netflix) or This Is Us (NBC) to win.

There were no surprises here, as experts correctly predicted every comedy category. That said, it was a night of firsts (with Donald Glover collecting his first career Emmy trophies)—and sixths, with Julia Louis-Dreyfus picking up her 6th consecutive Emmy for playing Selina Meyer. She's now the most-awarded actor in Emmy history. (Veep is ending next year, so the field will open up again in 2019.) Glover is the first-ever black director to win a comedy Emmy, while Master of None's Lena Waithe is the first African-American woman to win a comedy writing Emmy.

The movie/miniseries categories also offered few surprises. The only category here that failed to match advance predictions was the writing category, where Big Little Lies' David E. Kelley had been the favorite to win.

Prior to the broadcast, we collected Emmy predictions from over 70 TV critics and industry experts in 25 different categories. As a whole, the expert consensus was correct in 21 of the 25 categories, good for an impressive 84% success rate. No individual expert exceeded that mark and, in fact, only two reached it: Rolling Stone's Peter Travers and Variety's Debra Birnbaum. Out of those experts making predictions in all 25 categories, the worst performer was TV Line's Michael Ausiello, who had just 10 correct picks (for a 40% success rate).

Earlier this summer, we also invited Metacritic users to make their own Emmy picks in the same 25 categories. Over 2,500 of you submitted predictions. As a group, our users performed worse than the experts, getting just 18 of 25 (72%) correct. But 19 users had 21 or more correct picks. Topping the list was Chris Fasano, who correctly forecast 23 winners—that's two more correct picks than any expert had. Right behind Chris were three anonymous users and Joshua Couch and Samuel Mašlár, who each made 22 correct picks. 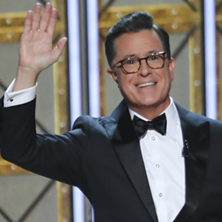 How did Stephen Colbert do in his first Emmy hosting appearance? Unsurprisingly, he veered into political territory during his portions of the broadcast (including an opening monologue featuring a surprise appearance by former White House press secretary Sean Spicer), and critics seemed to find such moments among the evening's least effective bits.

Here is a sampling of TV critics' responses to this year's broadcast (in no particular order); click on any publication name to read the full review.

The 2017 Emmys could have used a lot less Trump and a lot more spontaneity. ... Compared the sharp and varied Jimmy Kimmel hosted Emmys of last year, this year felt like it had one note and was determined to play it, even when it had become deafening.

Colbert performed best with his early and biggest moments, the opening number and monologue, but as often happens in lengthy awards shows, his later appearances were uneven. ... With few unplanned moments, the quick-thinking Colbert had few opportunities to show off his supreme improvisational skills. ... But those are minor misgivings. Overall, Colbert gave an impressive performance that suggests he may have a future in singing, dancing and acting — if the late-night thing doesn't work out.

Perhaps [Sean Spicer's appearance] could’ve faded into “bad memory” status if Colbert had punchier bits lined up for the remainder of the evening, but his pre-taped stunts didn’t do much to distract from the early stumble and the show around him didn’t come together. ... All of the stars aligned to make the 2017 Emmys an exciting year for progress, diversity, and a list of winners that’s just plain fun. It’s a shame someone as traditionally reliable as Stephen Colbert mostly served to spoil the vibe.

Inevitably, there will be those offended by the tone and content of this year's telecast, although frankly, Hollywood's progressive bent is by now pretty well baked into the award-show calculus. ... More broadly, although the Emmys obviously serve multiple masters -- and the race to finish on time meant awkwardly playing off some major winners -- the show seemingly made good on its primary mandate: to celebrate the medium.

The broadcast went off with few hitches, though more winners than usual had to be played off the stage.

Stephen Colbert was arguably better than Jimmy Kimmel’s pre-Oscars stint a year ago. ... [The opening musical number] gave the show some much needed energy considering Colbert’s long and bumpy monologue immediately after.

Colbert got off a few good non-Trump jokes and did a funny Westworld bit as a replicant quizzed by Jeffrey Wright, but he lost in the Variety Talk Series category to John Oliver, and thereafter (by coincidence, I’m sure) Colbert seemed to fade largely from view. It was left to others, the winners, to provide the night’s surprises and jolts.

The jokes weren't bad tonight and they weren't bad last year, but they definitely made me wish that somebody had written fresher material to showcase the kind of comedy Colbert has been trying to do lately and that has spawned his comeback.

As much as it bore Colbert’s stamp, Sunday’s broadcast was not formally a great departure from previous years: a production number, a monologue built on the rhythms of what Colbert and his like present from night to night. An awards show is a 10-ton truck that every year tries to remake itself as a speedy sports car and never really succeeds.

[Colbert's] jokes about the president seemed sufficient, perhaps obligatory. ... It was the first Emmy night in a long time (maybe ever) in which everything that was nominated seemed more than deserving. Some losses were difficult to process (not a damn thing for FX’s “Feud: Bette and Joan?”) but the fact remains, we’ve probably never had it so good.

It is no surprise that Stephen Colbert proved a constantly capable and engaging host, always ready with a quip at just the right moment and a fusillade of political jokes. But Colbert also had just the right amount of snark ready to tweak Hollywood’s casual liberalism and the industry’s self-image. ... But taking a step back from the immediate shock and awe of enlisting Spicer to send up his own time in the White House made the whole bit feel… well, icky. Colbert spends night after night tearing down the lies coming out of the Trump administration, so for him to turn around and welcome their former defender felt off, to say the least.

In other words, the Emmys were pretty much what you'd expect from entertainment awards shows, which have recently traded song-and-dance numbers for impassioned statements of, generally speaking, progressive principles. That's not to say that the Emmy Awards were boring. Though the tone was predictable, the show itself moved along at a lively pace, though a pair of taped comedy routines -- a "Westworld" spoof and RuPaul playing a living Emmy statue - could have been cut.

Overall the Emmycast, once it moved past the opening Trump slamfest, stuck to its primary business: handing out awards while keeping viewers entertained. Under Colbert’s domain, it succeeded in both respects. After a decade hosting “The Colbert Report” and two years on “The Late Show,” he knows how to call out life’s absurdities without getting acerbic. He knows how to be silly and still stay smart.

Colbert got off some good lines — one about Bill Maher's freewheeling use of a racial slur comes to mind — but too often seemed dwarfed by the stage. While I was put off by Kimmel's seemingly put-on anger at Trump, Colbert's breeziness didn't seem to suit the room.

But, all things considered, it was damn near impossible to resist the lure of the fantasy world created by the Emmys, one in which performers and artists from all backgrounds were celebrated for their excellence. Look at the winners list: There’s simply not much there to grouse about. And host Stephen Colbert skillfully brought viewers to a place that was witty and sleek; occasionally slow but more often sincere.

Were you happy with this year's Emmy winners? What did you think of the broadcast, and of Colbert as host? Let us know in the comments section below.