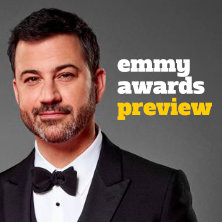 If there's one sure thing, it's that this year's Emmy Awards will be unlike any of its predecessors. The most obvious difference is that the Jimmy Kimmel-hosted ceremony—which airs live Sunday night on ABC beginning at 8p ET (5p PT)—will be the first remotely-produced, audience-free, "virtual" broadcast in Emmy history. You'll see presenters and winners filming themselves from their own homes (or remote locations), with the exception of a few in-studio guests joining Kimmel. Expect glitches aplenty—but maybe some slightly more genuine moments than you'd find in a more typical broadcast—and more screentime for Kimmel. (And notify the affiliates: This ceremony is definitely running long.)

Another likely difference: The winners list. Recent Emmy stalwarts like Game of Thrones and Veep (plus last year's big winner Fleabag) are no longer on the air, making many of the races more competitive than they have been in years—theoretically, at least. The leading 2020 Emmy nominees heading into Sunday's ceremony are HBO's Watchmen (with 11 nominations) and Succession (10), and they are indeed predicted to be among the night's top winners, with Watchmen a virtual lock to dominate the limited series categories. Succession, too, is widely predicted to win many of the drama series categories (including the top prize), but there could be some upsets there—and in the comedy categories, where the just-ended Schitt's Creek now stands as the frontrunner in many races.

To help you make an informed decision when filling out your home-office Emmy pool (which, we assume, consists of you, your dog, and the ficus tree in your living room), we have collected predictions from nearly 80 professional entertainment and TV writers and critics. Remember that the so-called experts are hardly infallible. Last year, the pros were correct in just 65% of the categories, though that was an improvement over 2018's 54% success rate.

For the 11th straight year we also invited Metacritic users to submit their own picks, and the results of over 1,100 submissions are also displayed below. (Last year our users had a 46% accuracy rate.) Note that we asked our users to make selections in just 23 categories this year (three fewer than last year), since the Academy has (at least temporarily) shifted some categories from the main ceremony to the Creative Arts Emmy Awards ceremonies earlier in the week.

* Ahead by exactly 1 vote

Who are the experts?

* Predictions made all or in part at goldderby.com (updated as of September 19, 2020).
Note that many experts did not make predictions in every category. Click on any link above to view individual predictions.

Check our site again late Sunday night after the Emmy ceremony for reviews of the telecast from a selection of professional TV critics. We'll also reveal which experts and users had the most accurate predictions this year.