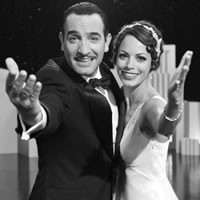 As expected by, well, everyone, The Artist triumphed at the 84th Annual Academy Awards on Sunday night, taking home the trophy for best picture among the five awards it earned overall. The first silent film to earn best picture honors since the very first Oscar awards in 1929, The Artist also won in the directing and lead actor categories. Martin Scorsese's Hugo matched The Artist's total of five Oscars, though Hugo's wins all came in the technical categories.

In just a moment, we'll see how accurate the experts (and Metacritic users) were in making their predictions, and we'll also sample the critical response to the broadcast and the performance of host Billy Crystal. But first, let's look at the evening's winners and losers.

The winners and losers

If the night's biggest Oscar "surprise" is Meryl Streep winning for best actress, it's safe to say that this year's awards were pre-ordained. Streep's win—her third in a career that has produced a record 17 nominations—actually was a bit unexpected; many experts predicted The Help's Viola Davis to win instead. The other categories mostly went as scripted, save for the two documentary awards and a few technical categories, but in all cases, the film or person who ultimately won the Oscar was typically the experts' second or third choice. In other words, there wasn't a single out-of-left-field shocker in the entire ceremony.

Listed below are this year's winners in each of the 24 categories, compared to the consensus predictions of industry experts (more on that in a moment).

As you can see above, the experts we surveyed last week did fairly well as a group, with their consensus picks proving to be correct in 18 of the 24 Oscar categories. While many actually finished with lower success rates individually, out of the 45 experts we tracked, five correctly forecast as many as 19 out of 24 (79%) winners. Those experts were:

As a group, Metacritic users were much less precise, correctly predicting just 14 of the 24 (58%) categories. But one user out-predicted all of the experts, while several matched the most successful professionals. The most accurate individual participants in our Oscar poll were:

In a word, dull. That seems to be the consensus opinion of the TV critics who watched the Brian Grazer-produced telecast. Not even a Cirque du Soleil performance or a pre-filmed segment featuring Christopher Guest and much of his mockumentary crew were able to liven things up. Here is a sampling of the critical reception:

"The result could hardly be called exciting, but after the pre-telecast fireworks Academy mavens were perhaps slightly relieved to be a little bit boring. If that was an unspoken goal -- other than some unscripted moments displaying genuine emotion -- they got their wish."

"The Oscar telecast has truly come to suck. Sunday night's 84th Annual Academy Awards was actually painful to watch. I cannot think of any major TV franchise that has become so disconnected from cultural relevancy as the Oscar telecast has in recent years. And this one with Billy Crystal was truly pathetic."

"A lifeless show featuring a bunch of pre-ordained winners and Crystal looking repeatedly surprised that his jokes were dying. ... It would help if the host wasn't recycling the same material he's been doing since the early '90s, and if the show didn't at times seem to be holding its nose and trying to ignore the unpleasant odor it found emanating from this year's nominated films. "

"Billy Crystal ... seemed to be overseeing a cruise ship dinner show designed to appeal to the over-50 travel club. Early on, it hit the rocks and started to list. Almost everyone drowned."

"Obvious jokes were the style of the night ... [and] the show was packed with filler."

"Last year's Oscar show may have been a headlong collision, but at least a crash has curiosity value. This year's show was as lively and colorful as cold oatmeal."

"Sunday's show was awfully boring, in part because it strived so desperate to be popular when it should have just embraced good. It played it safe by rolling out the same old tributes to old films, which only created the impression that Hollywood's best days are behind it."

"The veteran emcee... left his A game at home Sunday. At least Crystal's mediocre monologue was consistent with a mediocre 84th installment of Hollywood's biggest awards ceremony."

"The whole night looked like an AARP pep rally ... For a town that prides itself on tinsel and titillation, the night was pretty tame."

"Somewhere, against all odds, James Franco is buying drinks for everybody. The colossal hosting disaster from last year is now forgotten by the safe, unfunny, retro-disaster that was Crystal making jokes that he laughed at repeatedly and overseeing an Oscars telecast that was as poorly paced as any in recent memory."

"You may have smiled much of the way, but with Crystal we're used to laughing from beginning to end."

Bianco was actually happy to have Crystal back (especially compared to last year's hosts), and, like him, not every critic was uniformly negative about the broadcast; a few had some praise for the verteran comedian in his ninth Oscar hosting gig (second to only Bob Hope):

"A classy and orderly -- if less than eventful -- telecast. What the affable Crystal brings to Oscar night -- aside from his sharp timing, comedic creativity and good-natured barbs -- is an unparalleled sense of ease. Viewers and the nominees seem to relax knowing they're in experienced, capable hands. But after an eight-year absence, could the 63-year-old Crystal still bring it? Yes, for the most part, but perhaps with not quite as much zip on his fastball."

"It was a jolly good show, probably as good a show as any that lasts more than three hours and is obliged to run commercials for GCB and which bestowed its biggest awards upon a movie only a tiny percentage of the TV audience has seen."

"Crystal recaptured smartly the formula that worked for him in the past ... It wasn't the kind of performance that had millions of thumbs hovering over the Twitter buttons all night — that was Ricky Gervais back on the Golden Globes, silly — but it kept the show percolating, kept the focus on the movies and served up a few laughs in a show that at times felt longer than the Republican primary season."

"There was nothing new or unexpected in his act, mind you. But it was comfortable for all. ... To no one's surprise, he stewarded a sleek and entertaining Oscarcast."

Aside from Crystal's ill-advised use of blackface (in a brief Sammy Davis Jr. impersonation), which is drawing criticism online, the only other buzz the Oscars seemed to cause on Sunday night was literal: numerous sound problems during the broadcast had Twitterers voicing complaints.

Were you happy with the Academy's selections? What did you think of the broadcast, and Crystal as the host? Let us know in the comments section below.