Nick Cave has the best-reviewed major album of 2016 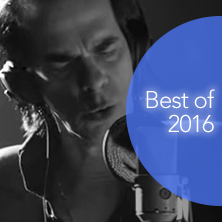 Several themes unite seemingly disparate entries in our list of 2016's best albums. One—unsurprisingly for a year that has seemed bleak at times—is death. Themes of mortality appear in the lyrics of multiple albums, including 2016's highest-scoring release: Skeleton Tree by Nick Cave & The Bad Seeds, a band whose frontman lost his son while the album was being recorded. For two artists in our top 10, death was even closer: both David Bowie and Leonard Cohen died within days of releasing their final albums.

Another commonality in our top 10 was much less bleak: that of veteran bands scoring some of their best-ever reviews late into their careers. That applies not only to Nick Cave but also bands like Radiohead, A Tribe Called Quest, and Drive-By Truckers. And there was one other easy way into the top 10: having the last name of Knowles.

At the time we are publishing this, there are 654 albums released during 2016 that have seven or more reviews from professional critics. Of those, 153—or over 23%—received universal acclaim (with a Metascore of 81 or greater). That's up from 2015's figure of 20% (and even further up from the 13% rate we saw in 2014). And four new studio albums managed to achieve an elite score of 90 or higher, up from last year's mark of three.

Below is this year's final ranking of the best albums (in Metacritic's database) released during 2016 as determined by their Metascores (an average of all reviews by professional critics at the time of each album's original release). Note that live albums, reissues, compilations, and the like are excluded from this chart, though they are listed separately a bit further down this page.

Perhaps the most critically acclaimed album in a multi-decade career filled with them, Skeleton Tree is also one of the most personal albums in Cave's discography. Lyrics dealing with the accidental death of Cave's 15-year-old son (who died during the album's recording) and Cave's always dramatic delivery combine with sparse, atmospheric instrumentation to create a haunting, emotional record. The result is not just the year's best-reviewed album but also one of 2016's best movies. Filmmaker Andrew Dominik's excellent companion documentary, One More Time with Feeling, captures some of the album's creation.

"It’s a record of unusual rawness, honesty and intensity."

The year's #2 release is also a movie-album twofer. The pop star's first album since her eponymous 2013 release somehow managed to be even better (and, with guests ranging from Jack White to James Blake to Kendrick Lamar, even more stylistically diverse), earning Beyoncé the best reviews of her career and nine Grammy nominations. But it's also a "visual album," launching with a 60-minute HBO film that itself is landing on some film critic top 10 lists.

"It’s a rare album that sounds this warm, this easy, this melodic, this fierce, this startling, this unforgettable."

It probably doesn't get much darker than a singer-songwriter dealing with his own approaching death, but in typical Leonard Cohen fashion, he does it with a welcome sense of humor (in addition to the bleakness). Cohen died at the age of 82 just 17 days after the album's release, having released three albums during his final five years of life.

It's both a comeback and a swan song. The legendary hip hop act's first album since 1998's The Love Movement is also billed as Tribe's final release, with the group set to disband following the death of member Phife Dawg (who was present for part of the album's recording). It's also the year's best-reviewed rap album.

"Sounding like nothing else out there, distinct even from Tribe's previous work, We Got It From Here is political without being preachy, fun without being unintelligent and next level out while being street corner down. A superb swansong."

Though he has yet to release a proper solo studio album, Chicago's Chance the Rapper is one of the decade's brightest hip hop stars. This, his third mixtape, is his most critically acclaimed release yet, and it includes contributions from his group The Social Experiment, with whom Chance released the 2015 album Surf.

"Coloring Book is one of the strongest rap albums released this year, and is destined to be on year-end lists aplenty."

Beyoncé isn't the only Knowles to drop a classic album in 2016. Blending funk, soul, and R&B, Solange's third LP (and first in eight years) placed just a few spots behind her older sister both here and in our collection of music critic top 10 lists.

"The album radiates universal beauty and truth in the tradition of Stevie Wonder and Minnie Ripperton--and the whole world could simply use more of that."

The Southern alt-rock band received the highest Metascore to date for their 11th studio album. American Band is also their most politically charged release to date, with numerous songs dealing with issues related to gun violence.

"The band displays a new level of clear-eyed purpose and here-and-now urgency on American Band. Eloquently plainspoken as ever about the pressing issues we face as a nation, they’ve made an album multiple decades into their career that establishes them as more directly relevant than ever."

Radiohead's first album in five years was welcomed more warmly by critics and music fans than its predecessor, The King of Limbs. One reason might be the inclusion of several older tracks (including "True Love Waits," which the band has been performing live since the mid-1990s) which have never before appeared on a Radiohead studio album.

"Radiohead's most melodically accessible collection, almost meditative in its ethereal mid-tempo loveliness, yet shot through with the kind of edgy details that never quite let a listener relax. It is chill-out music to put your nerves on edge. "

Released on the legendary rock star's 69th birthday—just two days before his surprising death from a previously unrevealed cancer—the 25th studio album from David Bowie is a fitting end to a remarkable career, finding him exploring new musical territory yet again while addressing themes of mortality.

"For all its jazz accents and solos, Blackstar ends up becoming a stage for the things that first made Bowie a pop star: his incessantly catchy melodies and elastic voice."

Two years after her breakthrough album Burn Your Fire for No Witness, singer-songwriter Angel Olsen returned with an even better third album that is divided into a more upbeat first half and quieter, sadder B-side. Combined, they showcase her increasing versatility and superb vocals.

"On the surface, a welcoming, accessible, wholly beautiful record, but laced with depth, allusion, and verbal knots that refuse to be untied. It’s addictive yet confusing, instantaneous yet difficult to fully understand--it continually forces to you to cease arguing, and simply listen."

Albums released between January 1, 2016 and December 31, 2016 with 7 or more reviews (15 or more for the first chart) in Metacritic's database were eligible for inclusion. Reissues and other older material, EPs, live albums, holiday albums, greatest hits albums, multi-artist soundtracks, and other compilations are excluded from the above lists. The Metascore is a weighted average of scores from top professional critics, on a scale from 0 (bad) to 100 (good). Albums are ranked by Metascore prior to rounding. All scores on this page are from December 21, 2016.

Now that we've heard from the critics, what about Metacritic users? Here are the 2016 releases receiving the highest average user scores:

Thousands of albums are released each year, and most of those don't even make their way to reviewers; as a result, the vast majority of the awful albums recorded each year do not show up on Metacritic. However, there are always some major releases this year that fail to impress critics, and we now share with you the 10 disappointing albums receiving the worst reviews in 2016:

What were your personal favorite and least favorite albums of 2016? Let us know in the comments section below, and don't forget to vote for your favorite albums of the year in our Best of 2016 User Poll. And for more of 2016's best albums, see which titles critics are including on their year-end top 10 lists.