Noname has the best-reviewed major album of 2018 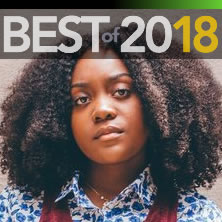 It's not often that a debut album lands at #1 on our year-end chart—depending on how you define "debut," it last happened in 2012 or 2007—but that is the case this year. After topping our list of 2018's best debut albums a few weeks ago, Noname's self-released studio debut Room 25 has repeated the honor on our list of all of 2018's albums, besting better known artists like Robyn, Kacey Musgraves, Janelle Monáe, and more. Shockingly, it's the first time in Metacritic history that a female artist has finished with the year's highest-scoring album (though Loretta Lynn missed by a fraction of a point in 2004).

Of the 513 new studio albums released in 2018 that have received at least seven reviews from professional critics, 168—or nearly 33%—received universal acclaim (with a Metascore of 81 or greater).That is up considerably from 2017's mark of 26%, and marks the fourth consecutive year that percentage has increased. That said, only one 2018 album with at least 15 reviews scored at least 90 (2017 had four such releases), and 2018 was the first time since 2013 that no album reached 95 or higher.

Which other artists impressed reviewers this year? Below is this year's final ranking of the best full-length studio albums (in Metacritic's database) released during 2018, as determined by their Metascores, which represent an average of all reviews by professional critics at the time of each album's original release. Note that live albums, reissues, EPs, compilations, and the like are excluded from this chart, though they are listed separately a bit further down this page.

"The pleasure of Room 25 is in hearing a master wordsmith turn words into feelings so that the feelings linger long after the words have stopped."

The Swedish pop star ended an eight-year break without a new solo album by releasing her best LP to date.

"Honey is a near-flawless dance pop album. It doesn’t need political or cultural commentary to assert relevancy; in Robyn’s deep understanding of human emotion and what moves us, Honey feels dire all the same. Release through dance has long been a tactic wielded by humankind, but rarely has it felt this inclusive, kind and positively radiant."

#3
Christine and the Queens
89 Chris (Because/Universal)

There was no sophomore slump for French singer-songwriter Héloïse Letissier. She followed her acclaimed 2014 debut Chaleur Humaine (later re-recorded in English) with an even better second LP praised for its intelligence and audacity. You can find it in English and French versions.

"A breathless, breathtaking achievement, Chris is a fascinating, infectious, endlessly suggestive work, an ode to 80s pop bombast that uses those splinters to build and then de-construct countless glimpses of Héloïse Letissier. Somewhere in amongst these myriad of definitions is Christine And The Queens, a shape-shifting pop entity perpetually aiming for something greater."

While country star Kacey Musgraves followed her stunning 2013 debut Same Trailer Different Park with a very slight sophomore slump (2015's Pageant Material), she has more than made up for it with third proper LP, which Musgraves produced alongside Daniel Tashian and Ian Fitchuk. It's her best album yet and an album of the year Grammy nominee.

"Musgraves hits one high note after another on Golden Hour; her talent as a songwriter and melody-maker is second to none, and each song is thoughtful, well-formed, and a delightful experience on its own. Together, the tracks on Golden Hour add up to an honest, cohesive musical experience that will linger in your mind and heart long after the final notes have faded."

#5
Idles
88 Joy As an Act of Resistance (Partisan)

Following a year after their equally great debut, the second album from the British punk band is another critic favorite this year, currently placing near the top on our compilation of top 10 lists for 2018.

"Joy as an Act of Resistance (and who, pray tell, can resist a title like that?) is one of the defining moments in modern punk and, with any justice, will stand as a testament to the working classes of the world and prove that new rock music is still being produced that can reach into your chest, tear out your heart-and then give you a great big hug that makes you feel like everything might just be alright in the end."

The inventive pop star's third full-length album arrived in April five years after her last release, The Electric Lady, with Monáe spending much of the in-between period concentrating on her acting career (including award-winning turns in Hidden Figures and Moonlight). Dirty Computer includes input from the late Prince (who also appeared on Monáe's previous album) as well as Grimes, Pharrell, and Beach Boys great Brian Wilson, and is one of this year's Grammy nominees for album of the year.

"Fierce, honest and a challenge to the forces of obsolescence, Dirty Computer feels like a vital upgrade from a true renegade."

On two of his three releases so far for Matador, Will Toledo has opted to re-record older tracks from his Bandcamp days. But with results this good, it's not a problem. This time, Toledo and his CSH bandmates re-recorded the 2011 LP Twin Fantasy in its entirety, and critics thought the result was a major upgrade.

"This is no stop-gap, contract filler of a record but rather a perfectionist giving a great album the full workout it deserved."

It seemed like music fans would go a third straight year without a new studio album from acclaimed L.A. rapper Earl Sweatshirt. But just a few weeks ago, with little advance warning, Some Rap Songs appeared. And it was some kind of great—though the late arrival meant that it would inevitably be excluded from a large portion of year-end top-10 lists, which tend to get written well in advance of year's end.

"One of the best rap albums of the year, a smoky iceberg of great emotional depth."

The most surprising member of our top 10 (given that critics seem to have forgotten about this February release when compiling their top 10 lists), Microshift is the third and final LP from the now-defunct psych-rock band from Leeds, who dissolved this autumn following abuse allegations leveled at frontman Matthew Johnson.

"Despite the album’s title, Microshift represents not a minor step up but a gigantic stride. On an immediate level the songs sound much bigger, cleaner and more confident. Every component is crisper, from the sharpened hi-hat to MJ’s scrubbed-up vocals."

The singer-songwriter's follow-up to 2016's stellar Puberty 2 and fifth LP overall is once again produced by her longtime collaborator, Patrick Hyland. It may be in 10th place by score, but Cowboy is turning out to be one of 2018's most memorable releases, with many critics placing it at or near the top of their year-end top 10 lists.

"These 14 complex compositions warp the pop textbook into something more knotty and internal, creating a unique zone where the 27-year-old thrives: She’s never sounded so large, even in the record’s quietest moments."

Albums released between January 1, 2018 and December 31, 2018 with 7 or more reviews (15 or more for the first chart) in Metacritic's database were eligible for inclusion. Reissues and other older material, EPs, live albums, holiday albums, greatest hits albums, multi-artist soundtracks, and other compilations are excluded from the above lists. The Metascore is a weighted average of scores from top professional critics, on a scale from 0 (bad) to 100 (good). Albums are ranked by Metascore prior to rounding. All scores on this page are from December 21, 2018.

Thousands of albums are released each year, and most of those don't even make their way to reviewers; as a result, the vast majority of the awful albums recorded each year do not show up on Metacritic. However, there are always some major releases this year that fail to impress critics, and we now share with you the 10 disappointing albums receiving the worst reviews in 2018:

What were your personal favorite and least favorite albums of 2018? Let us know in the comments section below, and don't forget to vote for your favorite albums of the year in our Best of 2018 User Poll. And for more of 2018's best albums, see which titles critics are including on their year-end top 10 lists, or view our list of this year's best debut albums.