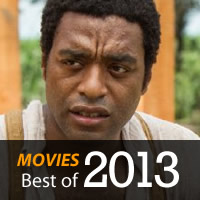 For the third time in four years, the year's best-reviewed movie was a wide release, rather than the arthouse fare that previously had a near lock on that top slot. (In fact, the top three 2013 films were released on over 600 screens nationwide). Based on the true story of Solomon Northup, a free man captured and sold into slavery in the 1840s, 12 Years a Slave surpassed all other films released theatrically during 2013 with a 97 Metascore. The film is also cleaning up on the awards circuit, and looks like the clear best picture frontrunner heading into next week's Academy Award nominations.

Director Steve McQueen's third feature (following two other well-reviewed films, Hunger and Shame), 12 Years a Slave actually has the second-highest Metascore for any new film released since 2000, behind only 2006's Pan's Labyrinth 98. It's a mark of just how good 2013's film slate was that Alfonso Cuaron's technical marvel Gravity 96 finished with a higher score than any film released in the previous six years, but could muster only second place in last year's rankings.

At the high end of the quality scale, 2013 was a good year, indeed. Out of the 561 releases with seven or more reviews from professional critics, 41 received a Metascore of 81 or higher, the cutoff we use to indicate "universal acclaim" from critics. That's up considerably from 2012's total of 34 great films.

Below, we rank 2013's highest-scoring films in a variety of genres. On the following two pages, you can find more complete lists of the year's best and worst wide and limited releases, respectively. If you are looking for even more of 2013's best movies, be sure to check out our annual compilation of film critic top-ten lists as well as our 2013 Film Awards Scorecard elsewhere on our site.

* Critics reviewed the original Japanese version with subtitles; the film will be released again in the U.S. next month with new English-language dialogue.

For this and all tables in this article, only movies with seven or more reviews released between January 1, 2013 and December 31, 2013 were considered. Re-releases are excluded. The Metascore is a weighted average of scores from top professional critics, on a scale from 0 (bad) to 100 (good). Although scores have been rounded to the nearest whole number, movies are ranked prior to rounding. All scores in this article are from January 5, 2013.

Continue reading for a look at the best and worst wide releases of 2013.