The best gaming apps for your iOS device this month

Below, we run through the best new iPhone, iPad, and iPod Touch games released within the past month. All titles are playable on all iOS devices unless otherwise indicated. 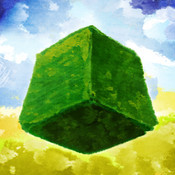 "Had Nintendo published Dream of Pixels in the 90s as some follow-up to Tetris, the publisher would have sold at least a million more Game Boys. It's that phenomenal. "

This new puzzle game looks and plays like Tetris in reverse.

From the Publisher: A brilliant twist on the old classic - unpack tetromino blocks instead of the usual packing. Tap on the mesmerizing grid to unpack tetrominos and watch them spin, rotate and fall. Clear the lines from the beautiful cloudy grid fast enough - or it's dream over. Features: 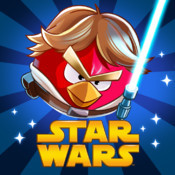 Combine the gameplay of Angry Birds with characters and settings from the Star Wars universe, and you have Rovio's latest casual game hit. Note that 20 additional levels set on the ice planet of Hoth, as well as a new Princess Leia character, were added today in a free update.

From the Publisher: A long time ago in a galaxy far, far away... a group of desperate rebel birds faced off against a galactic menace: the Empire's evil Pigtroopers! Rebel birds, striking from a hidden base, have won their first victory against the evil Imperial Pigs. During the battle, Rebel spies managed to steal secret plans to the Empire's ultimate weapon, the PIG STAR, and are racing to deliver the plans to the Rebel Birds. Now they need your help! Join an epic adventure with the Angry Birds in the legendary Star Wars™ universe! Use the Force, wield your lightsaber, and blast away Pigtroopers on an intergalactic journey from the deserts of Tatooine to the depths of the Pig Star -- where you'll face off against the terrifying Darth Vader, Dark Lord of the Pigs! Can you become a Jedi Master and restore freedom to the galaxy? Time to grab your lightsaber and join the adventure! May the birds be with you! 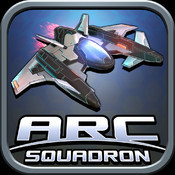 "In many ways Arc Squadron is a better sequel to Star Fox 64 than the official games that followed it, making it a must-have for mobile space combat fans."

This on-rails space shooter comes across as a more streamlined take on the Star Fox formula.

From the Publisher: An evil race known as the Guardians is taking over the universe, ravaging planets, and killing all peaceful life forms. You are the galaxy's only hope for salvation. As an elite pilot serving in the ARC Squadron, you are tasked to take on the Guardians in head-to-head combat and bring down their empire. With simple one-touch controls, you can shoot, blast, and annihilate enemy forces to hunt down each of the nine Guardian lords and destroy them once and for all. The ultimate battle for the galaxy is nigh. Are you on board? 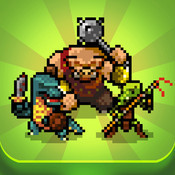 "Even without the homage to pen and paper nerdery Knights of Pen and Paper is a fantastic semi-self driven RPG adventure. It's clever, charming, customizable, and virtually infinitely replayable."

From the Publisher: Knights of Pen&Paper is an indie turn-based retro style pixel-art RPG. Inspired by the great titles of the 90's, you feel like playing a traditional pen and paper RPG. The player gets to control the playing characters AND the dungeon master, and you choose what battles to fight. Put together a bunch of monsters to make it a challenging fight and your rewards will be equally great! With 12 different classes (6 unlockables) and 17 characters (5 unlockables) to choose from, more than 100 quests, 50 monsters, 100 items and equipment, blacksmith, enchanter, mining, gathering, hidden treasures and a lot more. Knights of Pen&Paper gives the player lots of room to personalize your gameplay experience. Launching with 2 whole campaigns and many more are coming up! Each time a new game is created you can choose a different campaign and have a brand new game experience. 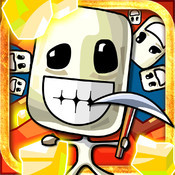 "Micro Miners is one of the biggest surprises of the year that came out of nowhere. Unique intensely satisfying gameplay paired with a cool presentation makes it one of those games that should be part of all iOS collections."

Don't be fooled by the rudimentary-looking graphics; this indie vertical scroller (inspired by Minecraft creator Markus Person's game Miners4K) is quite a challenge.

From the Publisher: Microminers is an arcade-puzzler which revolves around the control of a vast horde of tiny miners. The screen is constantly scrolling downward, and it's your job to collect all the available deposits of gold, silver, and coal that you see. Any missed resource represents a strike, and the level is considered failed if you miss three chances to collect. Further adding to the chaos is the fact that any miner left behind is lost indefinitely to the black nothingness beyond the screen. 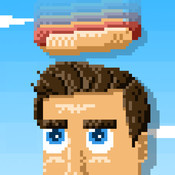 "Heads Up! Hot Dogs's chiptunes soundtrack alone is worth the price of entry, and it happens to come packaged with a sharp, charming, and funny game about putting beef franks on people's domes."

Billed as "the most realistic hot-dog-head-balancing game ever," Adult Swim's latest gem asks you to drop wieners on the heads of random strangers. And why wouldn't you want to do that?

From the Publisher: The world's first and best frankfurter-wearing simulator finally arrives on your iPhone, iPad and iPod touch! Assembled with the utmost care and attention under the supervision of highly-trained pixel craftsmen, Heads Up! Hot Dogs will tickle your fingertips as well as your taste buds with its rich tapestry of 2D flavors. Ultra-realistic, arcade-perfect visuals, stunning encased-meat sound effects and sizzling Space Age chiptunes combine to provide a culinary experience sure to satisfy even the most demanding gamer appetite. Travel the world as you drag and drop innocent wieners to safety, placing them ever-so-gently onto the noggins of befuddled passerby. Masterfully crafted by Adult Swim Games, creators of "Robot Unicorn Attack", and Emmett Butler & Diego Garcia, the masterminds behind such internet hits as Ultimate Flirt-Off and Dokideux Panikku. 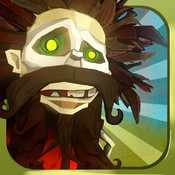 "Hairy Tales is a weird one, that's for sure. But if you're looking for something fun that's not quite like anything else on the App Store, this one's real gem."

Keep your Hairy fairies safe from enemies—and stop them from falling over the edge of their world—in this fast-paced puzzler.

From the Publisher: Combining tile-dragging mechanics with fast furious action, Hairy Tales is a puzzle action game about the zany adventures of a group of not too bright folk spirits, as you help them puzzle out evil conundrums in their mission to save their tile-based world from sickening corruption. It stars the Hairys, an excitable group of fairy folk who are so eager to clear their world of corruption that they simply don't watch where they're going. It's up to you to lead them to safety by placing tiles and power ups in their way. It has 72 levels split across three distinctive worlds, where players must simultaneously save the Hairys from falling off the edge of the world by re-arranging the tiles on each level, while acquiring power ups, magic mushrooms and destroying evil enemy Kikimoras and their three powerful end bosses. 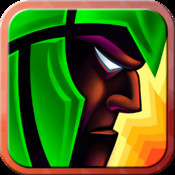 "There are better auto-running platformers out there, but Totem Runner does a good job of keeping up. The experience is well-balanced between twitchy button handling and careful planning-it's just a touch cerebral, and never too frustrating."

From the Publisher: When the world is threatened by a malevolent darkness a brave warrior rises, fearless and ready to run into the thick of battle. His confidence is steeled by his mystical ability to transform at-will into noble creatures including a rampaging rhino, capable of spearing enemies on his horn, a mighty eagle that can soar over deadly hazards, and a fearsome dragon able to vanquish all who stand in it's path. As he runs, the warrior breathes new life into the world and puts new stars in the sky. Knowing when to transform between shapes - man, bird, and beast - is key to success in this action-packed endless runner. Totem Runner's unique looks are matched by its compelling gameplay and immersive story. Take up the challenge and become the warrior within. FANTASTIC ACTION Transform into beasts, dragons and back to a warrior as you charge through the world defeating evil! AMAZING WORLDS The unique 'silhouette' style, haunting music and awesome animation immerses you into the mystical world of Totem Runner. AN INCREDIBLE JOURNEY Run, fly and rampage through five chapters of compelling gameplay. CHALLENGES ABOUND Become a Sorcerer, the Lord of Stars, or even the Great Shadow by completing in-game challenges. 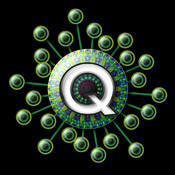 "It's a very simple idea, but a good one. QatQi offers a different type of word game challenge, and flourishes for it."

This single-player word puzzle game features a high-tech design and plenty of stats to track your progress, with new puzzles added daily; gameplay is free, though players concerned about their rankings will likely need to pay for "undos".

From the Publisher: Lose yourself in the world of QatQi (pronounced "cat-key"), a gorgeous and meticulously crafted word game that pleases the senses and tests the limits of your lexicon. Frustrated with the lack of innovation in other word games, indie designer Chris Garrett developed QatQi to freshen up the genre with never-before-seen gameplay, an elegant interface, dazzling art, and otherworldly music that changes as you play. In a word, it's INSPIRED (161 points.) QatQi offers more than just laying down tiles and reaping the rewards. Game puzzles form a "map" for players to explore, uncovering bonuses and avoiding barriers as they link letters together. It's easy to learn, but offers a new kind of strategic depth for the genre. Bolstered by robust statistics and enticing social features, QatQi is a complete package for word game lovers eager for something new. Beyond the innovations in gameplay and scoring, QatQi is an audiovisual tour de force with art and music that can be appreciated even without words. The game's puzzles will have you racking your brain, but its ethereal aesthetics will leave you in a state of zen.

The Metascore for iPhone and iPad games is an unweighted average of individual scores given by professional game publications on a scale of 0 (bad) to 100 (good). A Metascore of 75 or higher denotes generally positive reviews, while 90 or higher indicates universal acclaim. Scores are not calculated for games with fewer than four reviews.

A few to avoid

What are you playing?

Have you tried any of the games above? If so, what did you think of them? Are there any other new iPhone or iPad games that deserve a download? Let us know in the comments section below.