Carol is the best-reviewed movie of 2015 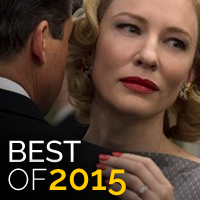 In fact, 2015 appears to have no shortage of good films. Out of the 634 films released during the last calendar year to receive at least 7 reviews from professional critics, 61 received a Metascore of 81 or higher, the cutoff we use to indicate "universal acclaim" from reviewers. That's both the highest total and highest percentage (over 9.6%) of great films in years.

In fact, the numbers get even more impressive when you focus only on those elite films that scored 90 or higher. There were 11 such films in 2015, and if that sounds like a high number, it is. As you can see from the chart below, we have never before recorded a double-digit total of 90+ releases in a single calendar year; the previous high was 8 in 2013.

Below are 2015's highest-scoring overall films, followed by separate lists of the year's best movies in a variety of categories.

For this and all tables in this article, only movies with seven or more reviews released in the United States between January 1, 2015 and December 31, 2015 were considered. Re-releases are excluded. The Metascore is a weighted average of scores from top professional critics, on a scale from 0 (bad) to 100 (good). Although scores have been rounded to the nearest whole number, movies are ranked prior to rounding. All scores in this article are from January 4, 2016.

Oh, we haven't forgotten about those. The lowest-scoring films released in 2015 can be viewed in the gallery below:

What are your selections for the best and worst movies of last year? Let us know in the comments section below. If you are looking for even more of 2015's best movies, be sure to check out our compilation of over 200 film critic top 10 lists as well as our 2015 Film Awards Scorecard.