Moonlight is the best-reviewed movie of 2016 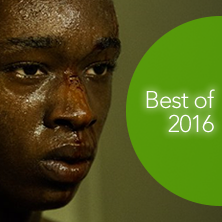 Was 2016 a good year for movies? We've seen a variety of opinions on both sides of the argument, but one thing is clear: it was indeed a great year for great films.

And by "great" films we mean high-scoring films. There were 12 movies released during 2016 that scored 90 or higher, more than in any other year this century. (See chart below.)

No 2016 film was greater than Barry Jenkins' coming-of-age drama Moonlight, a three-part look at the life of a gay black man growing up in a broken household in Florida. It's the highest-scoring release since Boyhood in 2014 and one of just four films in our entire database to score 99 or higher.

But the strength of 2016's very best films is such that Moonlight isn't even necessarily a favorite to win the best picture Oscar (though a nomination appears to be a certainty). It will have to contend with other films showered with praise by critics, including Kenneth Lonergan's drama Manchester by the Sea and the throwback musical La La Land.

Then again, there was plenty of love from reviewers to go around. There were 610 films released during 2016 to receive at least seven reviews from top professional critics. Of those, 328 received positive reviews (scoring 61 or higher)—that's an impressive 53%, and up from the 2015 figure (which was around 50%). And 58 of those films received a Metascore of 81 or higher, the cutoff we use to indicate "universal acclaim" from reviewers. That pretty much matches the percentage for the prior year.

Below are 2016's highest-scoring overall films, followed by separate lists of the year's best movies in a variety of categories.

For this and all tables in this article, only movies with seven or more reviews and released in at least one theater in the United States between January 1, 2016 and December 31, 2016 were considered. Re-releases of older films are excluded. The Metascore is a weighted average of scores from top professional critics, on a scale from 0 (bad) to 100 (good). Although scores have been rounded to the nearest whole number, movies are ranked prior to rounding. All scores in this article are from January 3, 2017.

* The eight-hour documentary O.J.: Made in America can be classified as both a television miniseries as well as a film (and will in fact be eligible for both Oscars and Emmys). Because it did screen in a few theaters prior to airing on TV, we are including it here (in addition to on our Best Miniseries of 2016 list).

It would be a shame to forget about those. You can find the 15 lowest-scoring films released in 2016 in the gallery below:

What are your selections for the best and worst movies of the past year? Let us know in the comments section below. If you are looking for even more of 2016's best films, be sure to check out our compilation of over 200 film critic top 10 lists as well as our 2016 Film Awards Scorecard.