Parasite is the best-reviewed movie of 2019—probably * 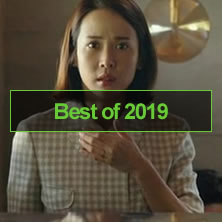 For the third consecutive year, a foreign-language film has landed the highest Metascore. The best-reviewed film released in 2019, Parasite comes from South Korean filmmaker Bong Joon-ho (Snowpiercer, Okja) and tells an increasingly twisted tale that traces the growing connection between two families from different socioeconomic classes.

The rare foreign-language film to become a major box office hit, Parasite first came to the public's attention when it won the biggest prize at Cannes (the Palme d'Or) in May. Numerous other awards and honors have followed, and the film has been a staple on year-end top 10 lists. Could an Oscar best picture trophy be next? There's still one major obstacle: No foreign-language film has ever won that top Oscar—not even Roma, last year's best-reviewed film.

* Oh, about that asterisk: At the moment, Parasite is just a tiny fraction of a point ahead of the year's #2 film, Portrait of a Lady on Fire. The latter has screened briefly for awards-qualifying purposes, but won't really reach theaters until February, at which time it will likely receive additional reviews. If those reviews are uniformly excellent, they could elevate Portrait into the #1 position.

Those two films aside, 2019 actually saw a decline in the number of spectacularly reviewed films compared to recent years. After four consecutive years in which the number of films scoring 90 or higher reached double digits, there were just six such films in 2019:

We tracked 552 films released during 2019 that received at least seven reviews from our panel of top professional critics. A total of 308 of those films scored 61 or higher, indicating that they were positively reviewed. That 55.8% approval rate also marks a decline compared to 2018's film slate, in which 58% of films received positive reviews. There were also fewer films in 2019 receiving a Metascore of 81 or higher (the cutoff we use to indicate "universal acclaim" from reviewers) than in the previous year.

Below are 2019's highest-scoring overall films regardless of genre, followed by separate lists of the year's best movies in a variety of categories.

For this and all tables in this article, only movies with seven or more reviews and released in at least one theater (or on a streaming service) in the United States between January 1, 2019 and December 31, 2019 were considered. Re-releases of older films are excluded. The Metascore is a weighted average of scores from top professional critics, on a scale from 0 (bad) to 100 (good). Although scores have been rounded to the nearest whole number, movies are ranked prior to rounding. All scores in this article are from January 5, 2020.

If you are looking for even more of 2019's best films, be sure to check out our compilation of nearly 300 film critic top 10 lists as well as our 2019 Film Awards Scorecard. We are also tracking critics' picks for the best movies of the just-completed decade.

And, for the opposite of good, we also have a list of 2019's absolute worst movies.