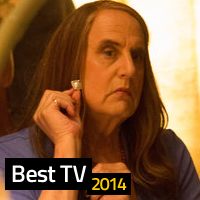 Below, we list the 10 highest-scoring new TV shows to debut in the U.S. during the 2014 calendar year. Shows must have at least 15 reviews from professional critics to qualify for the list. Specials, TV movies, and one-time miniseries are excluded from this list (though they are ranked in a separate list further below).

Note that Metascores are based on reviews at the time of each show's debut, which generally reflect just the pilot and perhaps a few subsequent episodes (though cable networks generally provide more episodes in advance to critics). Shows are ranked by Metascore prior to rounding.

Amazon first brought original programming to its Prime Instant Video customers in 2013, but it wasn't until this year that the shopping giant became a true rival to competitor Netflix by producing a critically acclaimed, awards-worthy show. Created by former Six Feet Under writer Jill Soloway, Transparent stars Jeffrey Tambor (recently nominated, like the series as a whole, for a Golden Globe) as a septuagenarian who comes out to her family as transgender, while the strong ensemble also features Amy Landecker, Gaby Hoffmann, Jay Duplass, Rob Huebel, Melora Hardin, Carrie Brownstein, and Judith Light. Critics were nearly unanimous in their praise, with many declaring it an easy choice for fall's best new show. And the accolades have continued. In addition to being our highest-scoring first-year program of 2014, the half-hour dramedy is also topping many critics' year-end top-10 lists.

American Horror Story may have launched the trend toward self-contained seasons of ongoing series, but 2014 was the year when the practice became the norm across the dial. In fact, this anthology format is the precise formula employed by shows ranked 2–4 on this list. The highest-scoring of the bunch is Nic Pizzolatto's True Detective, which utilized Emmy-nominated performances by Matthew McConaughey and Woody Harrelson, strong direction (in all 8 episodes) from Cary Joji Fukunaga, and famously impenetrable plotting to capture the public's attention early this year. Critics seem slightly less bullish about the series today than they did when it first aired, though it still stands as HBO's highest-scoring debut since Girls launched in early 2012. Next year will bring a second season with a completely new story (set in California rather than Texas) and an all-new cast featuring Colin Farrell, Vince Vaughn, Rachel McAdams, and Taylor Kitsch.

Writer Noah Hawley seems to have pulled off the impossible this year: using the classic Coen brothers film Fargo as the inspiration for a new television series without making viewers long for the original. Hawley's take on Fargo borrowed the movie's setting and tone while telling its own darkly comedic crime tale with new characters, played by the likes of Billy Bob Thornton, Martin Freeman, Colin Hanks, Bob Odenkirk, Oliver Platt, and excellent newcomer Allison Tolman (pictured). The Coens liked it so much that they signed on as executive producers; the TV academy liked it so much that they gave Fargo 18 Emmy nominations (including for best miniseries, where it took home the trophy). A second season (yes, with a new or mostly new cast, characters, setting, and story) is now in pre-production, with Kirsten Dunst, Jeffrey Donovan, and Jesse Plemons already signed up and Nick Offerman reportedly close to joining in.

The Missing doesn't get the same level of attention given to many of the other shows on this list—primarily because it airs on Starz, the cable network best known for R-rated, action-filled costume dramas—but critics awarded it with some of this year's best reviews when it debuted last month. (The series is on a short break for the holidays, but continues with new episodes on January 3rd.) An international production (which also airs in the UK on BBC One), this serialized drama centers on a father (James Nesbitt) who mounts a desperate, years-long search for his missing five-year-old son who was abducted during a French vacation. Like True Detective, the story unfolds across multiple time periods, and, as with that show, the mystery will be resolved at the end of season one, with a new story, setting, and characters coming next season.

This just-concluded first-season drama from some of the creative team behind In Treatment (Hagai Levi and Sarah Treem) depicts the effects of an extramarital affair on a struggling, working-class Hamptons couple from the two very different (and often conflicting) perspectives of the husband (Joshua Jackson, Fringe) and his wife (Ruth Wilson, Luther); Dominic West and Maura Tierney also star. While it wasn't an unequivocal success—some critics had problems with some of the soapier moments, as well as with the major discrepancies between the characters' perspectives in the cliffhanger finale—The Affair was certainly one of the fall's most lauded new dramas, and it will return to continue its story next season.

While Comedy Central's terrific Broad City went on to generate more buzz (and appear on more critics' top-10 lists), it is actually HBO's Silicon Valley that earned the best reviews for any new comedy series in 2014. Created by Office Space writer-director Mike Judge, Silicon Valley plays like a spiritual successor to that cult hit, but one focusing on the tech start-up culture of Silicon Valley. And that setting proves to be fertile ground for laughs in Judge's spot-on satire, which stars Thomas Middleditch, T.J. Miller, Kumail Nanjiani, Martin Starr, and Zach Woods. A second season is expected to debut in April.

The only primetime science documentary series to air on a major broadcast network this year (or any year in recent memory), Cosmos is a new take on Carl Sagan's legendary 1980 miniseries, this time hosted by astrophysicist Neil deGrasse Tyson and produced by Family Guy's Seth MacFarlane. The Emmy-nominated series was originally intended as a one-off, but producers have reportedly begun early planning for a second season, with Tyson likely to return as host.

That's no typo. The CW did indeed launch a critically acclaimed new series this year. It's a rarity for the network that usually churns out teen-targeted genre programming, but so is the fact that the series is a comedy. (Well, hour-long dramedy, but that's about as close as The CW gets to comedy.) Jane the Virgin stars the excellent and much-lauded Gina Rodriguez as a hard-working teaching student and telenovela obsessive who finds herself in her own soap opera-worthy storyline when she accidentally becomes pregnant through artificial insemination. Critics love the show's energy, style, exuberance, and perfect execution of material that could easily have turned into an over-the-top disaster.

WGN, the cable "superstation" formerly home to reruns and more reruns, branched out into original scripted programming for the first time in 2014, first with the mediocre Salem and then again with this much better drama. Manhattan is set not in New York but in Los Alamos, New Mexico—in the 1940s, when a group of scientists race to build the world's first atomic bomb as part of the famed Manhattan Project. John Benjamin Hickey (The Big C), Olivia Williams (Dollhouse), Daniel Stern (Home Alone), and Rachel Brosnahan (House of Cards) star. Though it remained under the radar among the general public, Manhattan earned praise from numerous critics, who were pleased to hear that WGN renewed the still-evolving series for a second season.

The best-reviewed new network sitcom of 2014, black-ish finds Anthony Anderson starring as a successful African-American advertising executive, husband and father who wonders if his superficially ideal suburban lifestyle is pulling him too far away from his cultural roots. In addition to earning solid reviews, black-ish has done what no other ABC sitcom has been able to do: retain enough of lead-in Modern Family's audience to be considered a hit.

High-scoring shows without enough reviews to qualify for the above list include UK crime drama Happy Valley (airing in the U.S. on Netflix), Starz basketball comedy Survivor's Remorse, Showtime environmental documentary series Years of Living Dangerously, BBC America's period spy drama The Game, and Disney XD's animated Star Wars Rebels. Additionally, at the time of this article's publication, new Amazon dramedy Mozart in the Jungle (which is available to stream beginning today) was on the cusp of qualifying for the above list. That show's score could change as more reviews come in over the next few weeks, however.

Several other newcomers did not receive exceptionally positive reviews at the time of their debuts, but nevertheless went on to impress critics (and wind up on many year-end top 10 lists) as their seasons progressed. Such shows include the aforementioned Broad City, HBO's Last Week Tonight With John Oliver, FX comedy You're the Worst, and (to a lesser extent) the Steven Soderbergh-directed medical drama The Knick on Cinemax. All grew stronger as their first seasons progressed and now come highly recommended by numerous critics.

Here are how the new series of the five major broadcast networks compared this year:

Here are the year's best one-off programs (including miniseries that will not return), based on a minimum of 7 reviews from TV critics.

Finally, here are this year's lowest-scoring new programs (among regular series, specials, movies, and miniseries) among those that received at least 7 reviews from critics.

What TV shows did you like this year? Let us know in the comments section below, and don't forget to submit your picks in our Best of 2014 User Poll. And visit our roundup of TV critic top 10 lists for a look at which shows (including returning series) were the favorites this year among the professionals.