Metacritic Users Pick the Best of 2014

The results of our fifth annual user poll are in ... 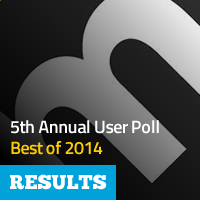 For the fifth straight year, we invited our users to list their favorite movies, games, TV shows, albums, and songs of the past calendar year. Nearly 1,600 people participated in the survey, and the results are tabulated below.

Note that participants ranked their five favorite titles of 2014 in each category, and we assigned a value of 5 points to each first-place vote, 4 points for second place, and so on down to 1 point for each fifth-place vote. We also asked our users to name the single most "overrated" release of the year in each category, and those "winners"—determined solely by the number of votes received, rather than points—are also listed below in each section.

Even our users couldn't resist the charms of Boyhood. The highest-scoring new film in Metacritic's history has been cleaning up on the awards circuit and dominating professional film critics' year-end top 10 lists, so it comes as little surprise that it was also included on more users' best-of-2014 lists than any other movie.

That doesn't mean that our users completely agreed with the critics. Films that cracked the top 20 with our users but not with the professionals included Christopher Nolan's space epic Interstellar (Metacritic users' second-favorite film of 2014), action-filled event films Dawn of the Planet of the Apes, Captain America: The Winter Soldier, X-Men: Days of Future Past, Edge of Tomorrow, and The Hunger Games: Mockingjay - Part 1, plus Australian horror hit The Babadook.

On the other hand, our users were less fond of some of the critics' favorite films of 2014, including arthouse fare Only Lovers Left Alive, Force Majeure, Mr. Turner, Two Days, One Night, Goodbye to Language and The Immigrant. And the new drama Selma is currently slotted 6th overall with critics but failed to crack the users top-20, though that is likely because the film has only screened in a few Los Angeles and New York theaters so far. (It opens nationwide this Friday.)

Metacritic's official game of the year for 2014 was Nintendo's Super Smash Bros. for Wii U, and that game (combined with its 3DS cousin, since user voting was not platform-specific) also topped our users' lists as 2014's best game. The Wii U console actually accounted for three of our users' top five games, which speaks to both the improving quality of Nintendo's offerings and a lack of significant releases for the PS4 and Xbox One in 2014.

This was also the second year in a row that the annual Call of Duty entry failed to crack our users' top 10 (after doing so in each of the first three years of our survey). That franchise at least fared better than Assassin's Creed. Despite two releases in 2014, the highest it landed with users is 30th overall (for Assassin's Creed Unity). The previous year's AC title, by comparison, placed 5th in our user poll in 2013.

With Breaking Bad departed from the airwaves, the field was wide open for 2014's best TV show. While professional critics seem to have settled on Fargo as the year's top title, our users preferred the fourth season of HBO hit Game of Thrones, though just by a hair: fellow HBO series True Detective was just behind it in voting. The latter show also placed second with the professionals, though critics' next three favorites—FX's The Americans, Amazon's Transparent, and CBS drama The Good Wife—scored lower with our users.

Instead, our users' voted more frequently for NBC's second-year drama Hannibal (#9 with critics), Netflix's Orange Is the New Black (#8 with critics), and AMC hit The Walking Dead #14 with critics). In all, seven of our users' top 10 shows were also in the critics' top 10.

In an incredibly tight race for 2014's best album, our users gave Annie Clark's eponymous St. Vincent album a slight edge over Run the Jewels' second LP and The War on Drugs' Lost in the Dream. These same three albums appear at the top of our music critic top 10 list compilation, though with a slightly different order (the professionals rate Lost in the Dream ahead of the other two albums).

In fact, our users' top 20 list is remarkably similar to the critics' list. Albums in the professionals' top 20 that don't appear below include Transgender Dysphoria Blues by Against Me!, Miranda Lambert's Platinum, and Sturgill Simpson's Metamodern Sounds in Country Music. Another album in the critics' top 20 but not the users' is Future Islands' Singles, though that album did include our users' pick for #1 song of 2014: "Seasons (Waiting on You)."

What do you think of the picks made by your fellow users? Let us know in the comments section below, and don't forget to check out our Best of 2014 section for all of our end-of-the-year coverage.