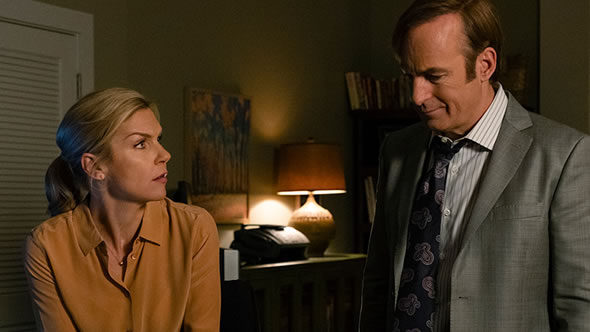 Spoiler warning: This page contains descriptions of events in this and previous episodes.

Breaking Bad prequel series Better Call Saul wrapped up its fourth season on Monday night with an episode directed by Adam Bernstein (who has previously helmed multiple episodes of both series). Critics love the series, but what did they think of the season-ender?

Below, we survey their responses to the episode, and/or the fourth season in its entirety. (Click on any publication name to read the full review.) Note that while we have grouped the reviews into rough categories beginning with the most positive, scores are displayed only in those cases where a reviewer has specifically indicated a score. Those scores have been converted to a 0-100 scale when necessary for purposes of comparison.

The search for Werner delivers the procedural thrills that make Gillgan’s Albuquerque shows some of the most purely entertaining prestige TV around. ... We get a side dish of that kind of plotting in Jimmy and Kim’s story, as well, with their careful (and expensive) groundwork for Jimmy’s appeal. ... But the bleak hollowness at the end of both these stories — the people left behind, gutted and drained of the lives they’d carefully built — is a reminder that these delights come with a devastating human cost.

The emotional weight of [the Jimmy/Kim] arc, even with its joyous Slippin’ Jimmy moments along the way, has been devastating, and its culmination in “Winner” was excruciating.

Even if the season didn’t turn out to be as explosive as promised and spent its time somewhat curiously in moments, each episode still felt satisfying in a vacuum and Better Call Saul still feels like the most adroitly crafted series on television.

Like Jimmy's penchant for saying the right words to attain his goals, this show is criminally good at leading us toward an already known destination in surprising, wrenching ways.

One of the most difficult hurdles in “Saul” is finding ways to braid the season’s story strands, but it’s brilliantly achieved in “Winner,” which spells out a key ethos of the series: No one can escape the mistakes they’ve made.

After every finale of “Better Call Saul,” I feel as though I’ve watched a very good show that is about to become great. And this year, I feel that more strongly than ever.

With both Mike and Jimmy, we began the series knowing the kinds of men they would be within a few years. Jimmy had a lot further to go emotionally to become Saul than Mike required to become Gus’s henchman. But among the things Better Call Saul has done so powerfully is to make their pre-Breaking Bad incarnations so appealing, and so much more vulnerable than the guys who worked with Walt and Jesse, that the inevitable instead became painful

[An] extraordinary season of television.

In showing us one individual’s preordained moral downfall, Better Call Saul spent Season 4 demonstrating how a hypocritical criminal justice system can ensnare a whole class of people for life. ... Knowing what catalyzed Jimmy’s transition casts both shows in a new light: Walt may have been born a sociopath, but Saul Goodman is nothing more than a typical product of the American justice system.

[Jimmy's] journey is more heartbreaking than Breaking Bad’s, and more agitating, too. Walter faced death and dissolution before taking a sharp right turn into crime. Jimmy didn’t even have to go that far. And yet Odenkirk has seduced us with Jimmy’s warmth and goodness; with his essentially good heart, which is much harder to see now than it was just a few episodes ago. The line from Jimmy to Saul to Gene is now crystal clear: Here is a man on the run from himself, and yet it’s only in a Cinnabon that he begins to see how useless it is to flee one’s own fate. As Better Call Saul shows us, the full journey of person reckoning with their own demons can take decades. For once we have a show willing to take the time to tell one person's story.

I’ll be honest. Season four of Better Call Saul didn’t feel as cohesive to me as the second and third seasons. The main story — Jimmy’s journey through grief and the strain it puts on his relationship with Kim — was one of the best things TV had to offer in 2018. But the sidebar stories about the criminal underworld of Albuquerque, as seen through the eyes of young hustler Nacho (Michael Mando), or the slow construction of the famous “superlab” from Breaking Bad, as seen mostly through the eyes of Mike, didn’t pay nearly as many dividends.

What did you think of Monday's episode, and of the entire fourth season? Let us know in the comments section below.