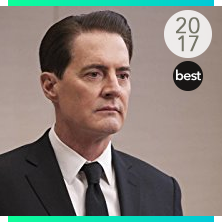 * Despite being a television series, Twin Peaks is also receiving votes from film critics as one of the year's best movies. Those votes are not counted here.

Below are the 125 individual top ten lists used to calculate the standings above. Some critics may list shows without ranking them in order; such lists are displayed below, without numbers, in alphabetical order. If a critic published multiple lists, only the most general list is included (e.g., a list of all shows rather than a list of new shows only). More specific lists (such as new shows only) were included as a last resort if a critic did not provide a more general list.