Critics pick the best movies of 2021 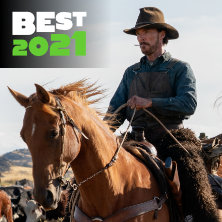 Below is our updated running tally of the films most frequently mentioned by individual critics on the year-end Top Ten lists. Note that if a critic ranks more than the standard 10 films, we will not include films ranked 11th or worse. (We do include unranked lists of 11-20 titles, though each film gets just one-half of a point.) In case of a tie for first or second, each film will receive the full points for that position. Our points system works as follows:

Because we include some foreign publications, it is possible for a few titles to repeat from last year's list due to differences in USA and overseas release dates.

Below are the 318 individual top ten lists published by the film critics regularly included in Metacritic's score calculations, as well as a few extra lists from additional prominent film sources. Some critics merely list films without ranking them in order; such lists are displayed below, without numbers, in alphabetical order.

View our updated 2021 Film Awards Scorecard for the latest awards and nominations from 65 different film critic groups and industry organizations.

We are also tracking best of 2021 critic top 10 lists in TV and music.

And don't forget to submit your picks for the best movies (and TV shows, albums, and games) of 2021 in our Best of 2021 User Poll.