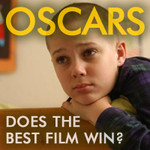 With the February 22nd date of this year's Academy Awards ceremony fast approaching, it's time to take a quick look at this year's best picture race—as well as those from the past two decades—to see where critics and Oscar voters diverge.

First, as a recap, here are this year's best picture nominees:

If Boyhood captures this year's best picture trophy as widely expected, it will mark the second year in a row that Academy voters have opted for the year's best-reviewed film. That, however, is not the norm. More often than not, the best picture Oscar does not go to the critics' favorite movie of the year. In fact, those films don't always get nominated by the Academy. And, as you can see below in our quick look back at the last two decades of best picture nominees, having the best reviews among just the nominated films isn't even enough to guarantee a win.

According to the data below, the year's overall highest-scoring (i.e., best-reviewed) film ...

Though it does not apply this year (since Boyhood, the year's highest-scoring film, was nominated), in the 10 years when the high-scoring overall film was not under consideration for best picture, the Oscar went to the highest-scoring nominee just 3 times (30%). The Oscar has actually been awarded to the lowest-scoring (worst-reviewed) nominee three times as well.

Since the best picture nominee pool was expanded six years ago, no film below fourth place among the nominees (ranked by Metascore) has won the Oscar. And, in the same period, the lowest winning Metascore was Argo's 86. In other words, if you were thinking of picking American Sniper, The Imitation Game, or The Theory of Everything in your Oscar pool, you may want to reconsider.

Of course, what stands out the most when looking at past years is that Academy voters and film critics appear to be two very distinct groups, and there is no predicting when their tastes will overlap. A high Metascore is no guarantee of victory; nor are previous awards handed out by various critic groups. (See The Social Network four years ago, which swept nearly every major award but could not grab the Oscar.) What's especially striking is the number of great films that never even get nominated, including numerous titles that have scored 90 or higher.

See for yourself: Below are each year's best picture nominees, ranked by Metascore from best- to worst-reviewed. The Oscar best picture winner each year is marked with a star (

), while each year's highest-scoring film is marked with a

Check back later this week as we take a closer look at predicting the key Oscar races. Next week, just before the ceremony, we'll reveal our users' predictions and sort through the experts' picks in all 24 categories. In the meantime, give us your own Oscar picks, and review this year's nominees.