What critics are saying 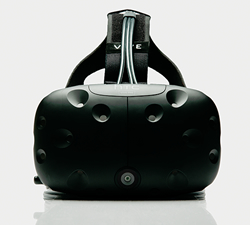 A week after the launch of the Oculus Rift virtual reality headset, a new competitor in the world of VR gaming has arrived. HTC's Vive costs more (nearly $800 compared to the Rift's $600 price tag), but also provides more in the box: namely, a pair of one-handed, motion-sensing SteamVR controllers as well as two base stations that track your movement over an area of at least 6 feet by 5 feet (up to a maximum of 15 feet by 15 feet).

The aim is for that increased physical action and freedom of movement to provide an even more immersive experience, akin to a Star Trek holodeck. The downside is that you'll need to find a large enough clear space in your home to take full advantage of it.

Both new VR headsets offer similar visual resolution. As with the Rift, you'll need a high-powered Windows PC to run the HTC Vive, and the minimum system requirements are similar to those for the Oculus headset. Unlike Rift, which has its own proprietary software and storefront, the Vive runs on Steam and pairs with the Steam distribution portal. A few games (including Fantastic Contraption and Job Simulator) are free with your hardware purchase. In all, over 100 compatible games are available via SteamVR at launch, though the bulk of those are fairly simplistic.

In general, critics seem to prefer the Vive to the Rift, thanks to the more immersive experience provided by the included controllers. Below, find quotes from professional reviews of the Vive hardware. (Click on any publication name to read the full review.) Scores (converted to our 0-100 scale) are listed only if one has been assigned by the publication itself; otherwise, we have grouped the reviews into rough categories, from most to least positive.

If you have the space for it, for my money, the HTC Vive blows the Oculus out the water as a long term investment. ... I've used the Vive for the better part of two weeks now as a daily part of my routine and I've not once experienced motion sickness, fatigue or eye strain. I have instead experienced gaming in a form that's more exciting than anything else I have played in some time.

Even if you’re not into VR, or have no interest, you need to try the Vive. This is the VR experience you’ve always dreamed of. No competitor, including Oculus Rift, can compare to the Vive right now. It’s the closest thing we’ll get to The Matrix anytime soon.

Its demanding setup and fits of unreliability give the Vive major caveats, but the simple fact is that this is an unprecedented piece of hardware that opens up absolutely amazing possibilities for gaming and beyond. ... If you’re willing to rearrange your furniture to experience everything this exciting new technology has to offer as soon as possible, the Vive is absolutely the VR headset for you.

It's reinvigorated my love of gaming. ... What sets Vive apart so thoroughly is how it blurs the division between the digital space and the real world. Spend a few minutes in even the most basic of Vive games, and it's hard not to get sucked into believing that the two environments are one and the same. It's simply more realistic, more engaging, and frankly more fun than any of the others.

With Oculus’ Rift, you’re restricted mostly to sitting experiences, waggling thumbsticks or tapping buttons on a gamepad—the novelty’s all in what you can do with your head. The Vive adds both of your hands by way of large dual wands that look a bit like Boba Fett’s Slave One. The difference these make in virtual space is staggering. ... If you have money to burn and an interest in virtual reality, for now, HTC’s Vive is the device to beat.

To be frank, the Rift left me scratching my head as to why I'd need virtual reality to enjoy some of its games. Meanwhile, all of the games designed for the Vive leave no question as to why they require hand controls. VR for games that work in 2D is neat, but it feels like a novelty after sampling the alternative. Room-scale games do not feel that way at all. ... HTC and Valve came together and created something truly incredible. The experience that you get from room-scale VR with hand-tracked controllers is going to change your definition of what gaming can be.

Perhaps the sheer novelty of the Vive’s experience will wear off with more time, or perhaps developers will fail to take the fullest advantage of the new interaction models the Vive provides. At this point, though, I’d say that’s unlikely. If you can get over the significant space requirements, the facial comfort issues, and the price point (especially if you don’t have a decent gaming PC), HTC and Valve will sell you a little glimpse of the future that you can use in your house right now.

If you want the very best VR, the Vive offers motion controllers and an entire room-tracking system in a package the Oculus Rift can't match. Yet. But you trade convenience and compactness for a stellar room-scale VR experience, if you have the room for it. I don't know if I'd want all this tech in my life right now if I wasn't reviewing it. It's complex, bulky, full of wires and parts to sync. But I'd want to be near it. Very near it. And I can't wait to see the apps and games that come next.

It's oh-so-close to being the Holy Grail of VR experiences. It's just too bad that ergonomics get in the way of truly enjoying it.

Unlike Rift, Vive comes with strict spatial requirements if you plan to utilize its hardware's full potential. It's not the easiest suite of hardware to set up, nor is it as refined as Rift, but Vive delivers the most advanced VR experience to date, a luxury that comes at a cost and with compromises. Where Rift feel's like a VR headset built for mainstream consumption, Vive caters to the hardcore crowd that will stop at nothing to get the best VR experience.

The HTC Vive’s goggles are heavy—noticeably heavier than the Oculus Rift’s. They’re heavier than a bike helmet, heavier than a baseball cap, heavier than scuba goggles, and probably heavier than anything you’ve ever put on your face. But it’s a small price to pay for walking around in a virtual space, especially if you’re excited about it, so most people will probably disregard the excruciating weight of the plastic headset. I know I did. ... But the HTC Vive ... [is] launching with a bunch of half-baked titles that would be better off bundled together in a sale bin.

The Vive is as "there" as the Rift is at this point. Put it on for the first time, and your mind is blown. But spend an uninterrupted hour messing around in the virtual, and you'll pine for the gentle caress of actual reality. That just speaks to how new all of this tech is. ... HTC doesn't have the game exclusives that Oculus does, but Vive offers exclusive experiences that aren't yet technically possible using any of its competitors. If you want the fullest VR experience that's available right now — and you have both the space and the computer to support it — the Vive is your answer.

Cables are the biggest nuisance of the Vive. The cable that runs from the headset might be long (about 10 feet), but it's still easy to get caught on if you don't keep track of where it is. This is a bigger issue for whole-room VR than it is when using the Vive standing or sitting.

Playing room-scale Vive experiences leaves me feeling giddy about gaming in a way I haven’t felt...well, since the earliest days of the Oculus. Walking around. Touching things with my hands. Truly inhabiting a space. These are logical next steps for virtual reality and for gaming, and it leaves the Rift looking backwards by comparison. Safe, even.

So the headset is heavier and not as polished as its competitors, the cable bundle is clunky, and setup requires a large initial investment from the player in just about every way. ... The Vive asks a lot from anyone buying the platform, but it gives just as much back, if not more so. Everyone has the same reaction after a demo, in our experience: They remark on how complicated it seems and how little they’d want to set one up in their own home, and then they get wide-eyed and want to tell you all about how amazed they are by the experience.

The HTC Vive is definitely a first generation product. It is apparent how much time was spent on making sure this product was as great as it could be, but it has its limitations. ... [But] HTC Vive definitely offers the best VR experience out of the box so far.

It tries so many damn things, and it gets most of the things so right, though not every feature is a home run. $799 is a lot of cash, but it really feels worth it here. The experience is in a lot of ways so much richer than any other headsets out there, including the Rift.

The virtual experience is still awe-inspiring, but the ability to literally reach out and touch something is a game-changer. As fun and mind-blowing as the Vive is, a lack of built-in audio and a sometimes confusing interface are disappointing. The amount of setup is frustrating, too, especially for those of us who live in tiny apartments or houses that don't have the room or a cluster of outlets to spare.

Expectations for the Vive are high — and the headset both exceeds and falls short of them. ... On a pure image quality level, both [Rift and Vive] are at the top of the VR headset game. But the Rift showed everyone that consumer VR headsets can be both comfortable and a little stylish, while the significantly heavier Vive remains something you might expect to see in a fighter pilot training course or a ‘90s arcade.

The Vive is, right now, pure potential. ... The Vive is both the best VR system available and something you probably shouldn't buy just yet. For as incredible an experience as it can create, it's equally matched in discomfort — the headset's straps, paired with the wire situation and the headphone situation, make an expensive, bleeding-edge electronics product feel woefully underdone.

The Vive is less buzzy than Oculus, and its product is less refined. That’s not saying much—I wouldn’t buy either right now. Yet the Vive has two clear advantages that helped me get lost in the experience and forget all about the gear. First, I was free to move around the whole room, so I could peer over the edge of the reef or inspect a floating critter up close. Second, holding motion-sensitive controllers, my hands became part of the action so I could interact with the undersea life. ... After a week with each, I had more fun with the Vive than with the Rift.

Do you have the Vive headset? Are you planning to purchase one? Let us know in the comments section below. You can also read reviews of the competing Oculus Rift headset.