Top TV Shows to Watch (and Stream) in June

Below, our editors have selected the most interesting TV shows (including TV movies and specials) debuting this month, listed in order by premiere date. 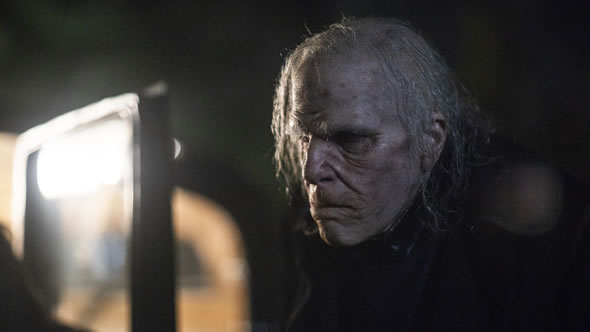 Yes, that title is pronounced "Nosferatu," and, yes, it's based on the 2013 novel by Joe Hill (aka Stephen King's son). AMC's latest original series stars Zachary Quinto (that's him above) as an evil vampire who feasts on souls and has a bad habit of abducting children and forcing them to spend their lives in an alternate fantasy universe known as Christmasland. (And that's not a good thing, regardless of how you feel about Christmas.) The only person who appears to have any chance at stopping him is a young artist (Ashleigh Cummings) with a supernatural ability to find lost things. The pilot seemed to be well received at its SXSW premiere earlier this year, though TV critics may prove a tougher audience.
Photo by Zach Dilgard/AMC 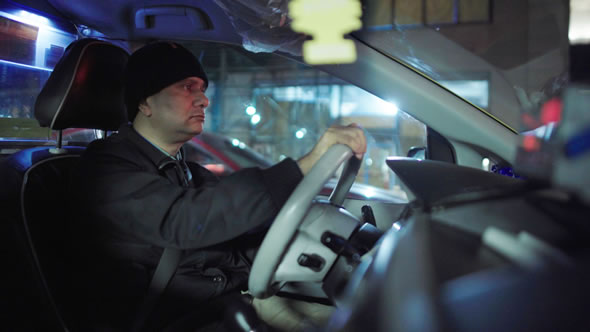 The first documentary TV series produced by The New York Times goes in depth on a single story each week, tied to a piece of recent investigative journalism in the Times. Topics for June include a look at New York taxi drivers shouldering enormous debt after the collapse of the taxi medallion industry and family separation at the U.S.-Mexico border. Each episode will also stream on Hulu one day after its FX premiere.
Photo by FX 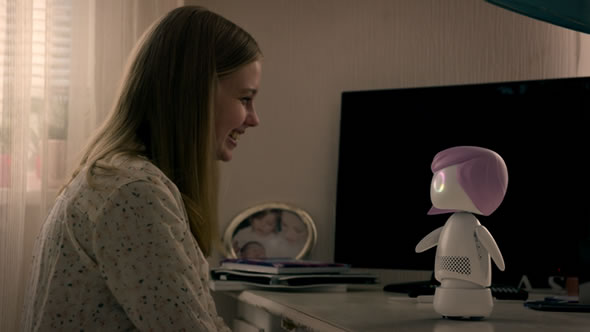 Whether or not its a full "season" is debatable, but at least its something. Delayed a bit by the unexpectedly lengthy production process for the recent interactive episode Bandersnatch, Black Mirror finally returns for its official fifth season, spanning just three new episodes. In a surprise twist, all three episodes depict a near future where technology has made people's lives better and happier. Oh wait—that's not true at all. What is true is that Miley Cyrus appears in one of the episodes, while other stars include Topher Grace, Anthony Mackie, Nicole Beharie, Andrew Scott, Yahya Abdul-Mateen, and an incredibly creepy robot doll. One episode also features a new score by famed electronic music composer Ryuichi Sakamoto. And you won't have to make any choices this time, aside from when on June 5th to hit the play button.
Photo by Netflix 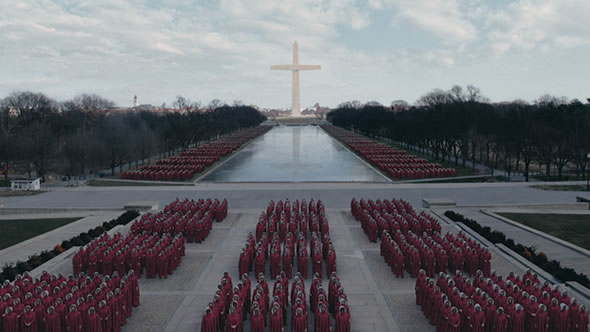 Starting a bit later than normal (and missing the Emmy eligibility cutoff in the process, which should make Game of Thrones producers happy), the third season of Hulu's dystopian drama series makes Bradley Whitford a series regular and also adds Christopher Meloni and Elizabeth Reaser to the cast. The series was criticized at times last season for spinning its wheels, and a few critics think that the first six episodes of this third season (the only portion they've seen so far) are a bit better at moving the story along, though some reviewers think it's as repetitive (and depressing) as ever, at least at the very beginning of the season.
Photo by Hulu 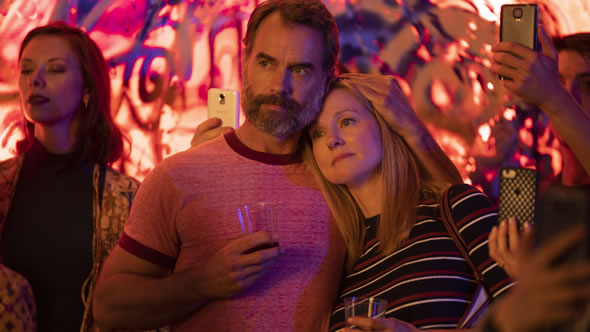 This 10-episode Netflix miniseries is a present-day continuation of the British-produced 1993 miniseries (which aired in the States on PBS) and its two Showtime sequels (which aired in 1998 and 2001), all of which, in turn, were based on Armistead Maupin's novels set in San Francisco. Maupin serves as a producer of the new series, which comes from Orange Is the New Black writer Lauren Morelli. Original cast members Laura Linney, Olympia Dukakis, Paul Gross, and Barbara Garrick return, joined by Ellen Page, Murray Bartlett, and Charlie Barnett. Also appearing in smaller roles are Zosia Mamet, Victor Garber, and Molly Ringwald.
Photo by Alison Cohn Rosa/Netflix 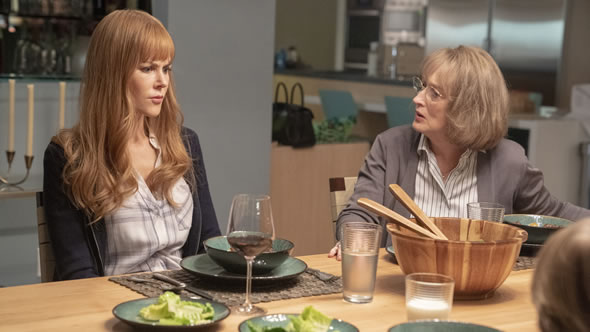 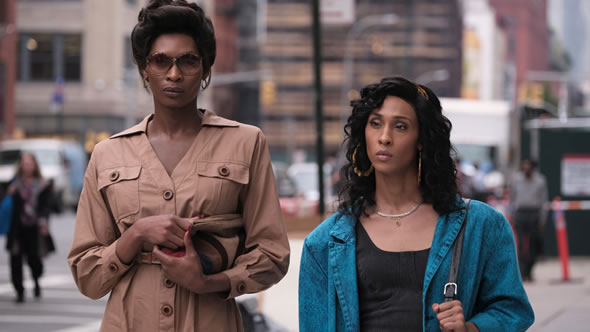 The second season of Ryan Murphy's drama series centered on New York's ball culture will jump forward by over a year to 1990, near the release of Madonna's "Vogue" single. Sandra Bernhard, who appeared briefly as a nurse last season, will be a regular in season 2 (which deals more thoroughly with the HIV/AIDS crisis), while Patti LuPone will guest.
Photo by JoJo Whilden/FX 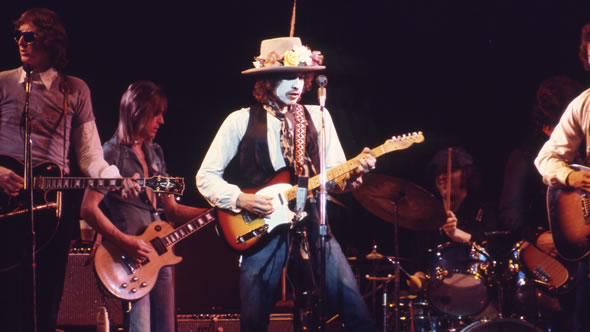 Bob Dylan's 1975-1976 concert tour, bookending the release of his album Desire, is famed for the quality of Dylan's performances as well as its star-studded lineup, which at times included Joan Baez, Joni Mitchell, and Roger McGuinn, among other big names. It was also, fortuitously, extraordinarily well documented with both video and audio recordings. Director Martin Scorsese uses some of the former for this Netflix feature that is part concert film, part documentary about the tour. The audio tracks are also getting new life with a simultaneous 14-disc box set release featuring five entire concerts plus other rarities from the period.
Photo by Netflix 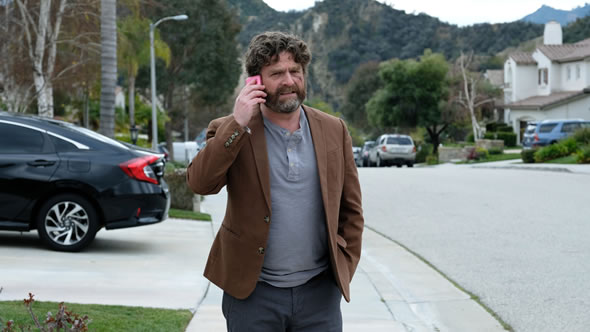 Certainly one of TV's odder shows—with a now four-season run that would be all but unimaginable prior to this "peak TV" era—Baskets features strong performances from Zach Galifianakis (in dual roles as twins Chip and Dale) and Emmy-winner Louie Anderson (as their mother). These new episodes find the latter moving in with her boyfriend Ken (Alex Morris), while Galifianakis' Chip takes the plunge and moves out of his mother's house for the first time in his life—and into an RV park, where he makes new friends.
Photo by Erica Parise/FX 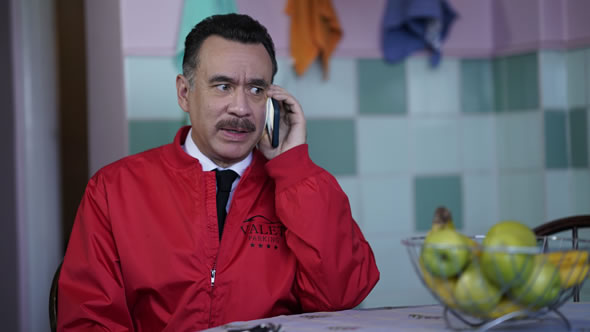 Fred Armisen's latest comedy series is different in one major way: It's a (mostly) Spanish-language show. Armisen co-created the series and produces, though he is just a recurring guest star on screen; the main cast consists of Ana Fabrega, Julio Torres, Cassandra Ciangherotti and Bernardo Velasco, who play a group of friends who "turn their love for horror into a peculiar business" in a stranger, alternate version of present-day Mexico City (filmed on location in the real-life Mexico City).
Photo by Jennifer Clasen/HBO 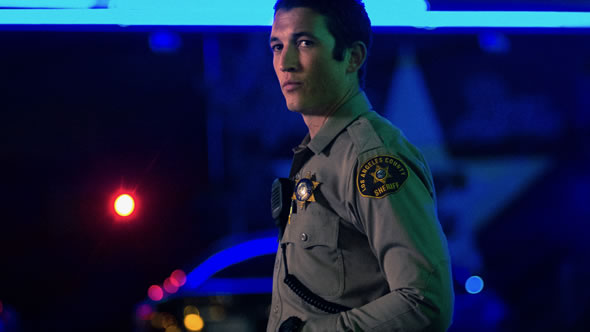 Sometimes stellar, sometimes confounding, sometimes borderline terrible, the films of Nicolas Winding Refn are almost always interesting. But what would a 13-hour Refn film be like? Amazon has the answer for you in the form of a 10-episode limited series—directed in its entirety by the Danish filmmaker, who also penned the script with comic book writer Ed Brubaker—in which each episode clocks in at 60-90 minutes. (TV critics are not going to be happy about that.) Miles Teller stars as a police officer turned hitman who crosses paths with the man who killed his partner in a very diverse Los Angeles criminal underworld populated by the Yakuza, members of the Russian mafia, Mexican cartel assassins, and other unsavory characters. John Hawkes, Billy Baldwin, and Jena Malone also star, while Darius Khondji serves as cinematographer and Cliff Martinez provides the score. Two of the episodes (but not the first two, oddly enough) debuted at the Cannes Film Festival a few weeks ago, and critics there were wildly divided (and, unsurprisingly, a bit perplexed) by what they saw, with some calling the episodes tedious and needlessly violent but others finding it stylish and hypnotic.
Photo by Amazon Studios 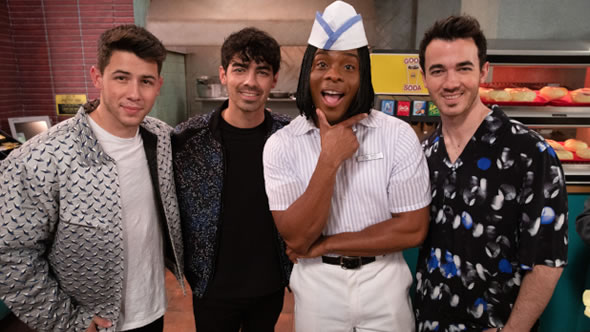 This revival of the 1990s sketch comedy series—sort of a tween version of SNL, and Nickelodeon's longest-running live-action series at 171 episodes—features an all-new cast, though a few stars of the original show (including Kel Mitchell, Lori Beth Denberg and Josh Server) will appear in the June 15 premiere, as will the Jonas Brothers. Another original cast member, SNL's Kenan Thompson, is one of the new show's producers (along with Mitchell, Kevin Kay, and Jermaine Fowler). 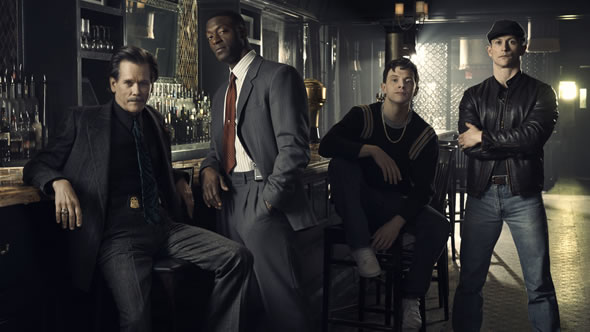 Originating in a concept from Ben Affleck—as if the early 1990s Boston setting didn't give it away—this Showtime crime drama stars Kevin Bacon as a corrupt FBI agent who teams up with an assistant DA (Aldis Hodge) for a case against a family of armored car robbers that eventually develops into something even bigger. Homicide: Life on the Street's Tom Fontana serves as showrunner, and the cast also includes Sarah Shahi, Jonathan Tucker, Kevin Dunn, Mark O'Brien, Jill Hennessy, and Lauren E. Banks.
Photo by Eric Ogden/SHOWTIME 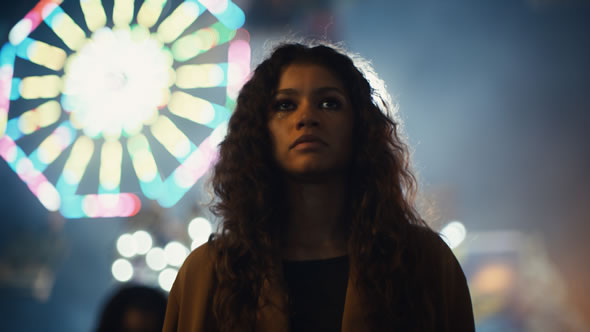 A modern, eight-episode coming-of-age drama written and partially directed by Sam Levinson (the son of Barry Levinson, and writer-director of Assassination Nation) and based on an Israeli series of the same name, Euphoria centers on a group of high school students navigating the challenges of teenage life, gender identity, sexual awakening, and drug addiction. Zendaya leads a cast that also includes Hunter Schafer, Jacob Elordi, Alexa Demie, Algee Smith, Sydney Sweeney, Barbie Ferreira, and Maude Apatow, while Drake is among the producers.
Photo courtesy of HBO 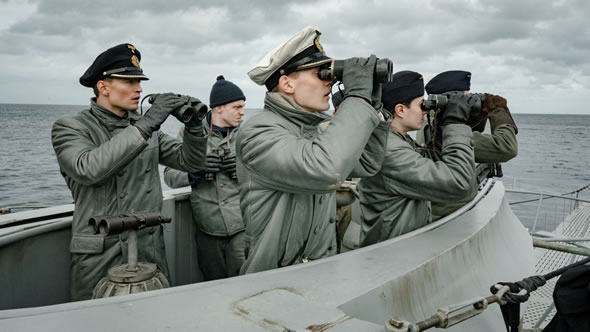 A sequel to Wolfgang Petersen's hugely acclaimed 1981 film Das Boot (which was based on the book of the same name), this eight-episode, German-produced World War II miniseries picks up in the fall of 1942 about nine months after the events of the film. The series will focus on the crew of the German submarine U-612 as well as a land-based storyline centering on members of the Allied forces and the French resistance. Vicky Krieps, Lizzy Caplan, Tom Wlaschiha, James D'Arcy, and August Wittgenstein head the cast for director Andreas Prochaska. Reviews were mostly good when the miniseries premiered in the UK earlier this year. Unlike HBO's recent all-English-language Chernobyl, every character here will speak the language they are supposed to be speaking, so be prepared to read some subtitles.
Photo by Sky Atlantic 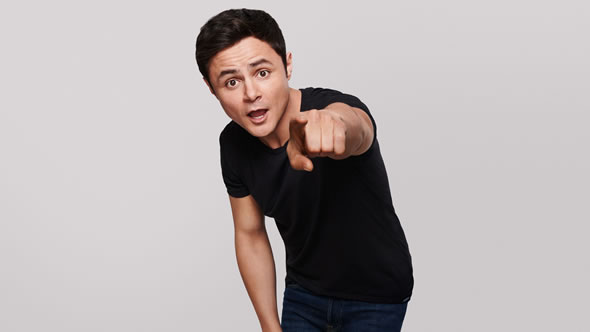 If you recognize the man above—the titular Arturo Castro—it is likely from his roles on Broad City (as Jaime) or Narcos (as David Rodriguez in season 3). Now, he's bringing his web series Alternatino to a wider audience on Comedy Central. The sketch series finds the Guatemalan actor satirizing pop culture, political issues, and dating, blending topical humor with depictions of life as a Latin millennial living in America.
Photo by Gavin Bond 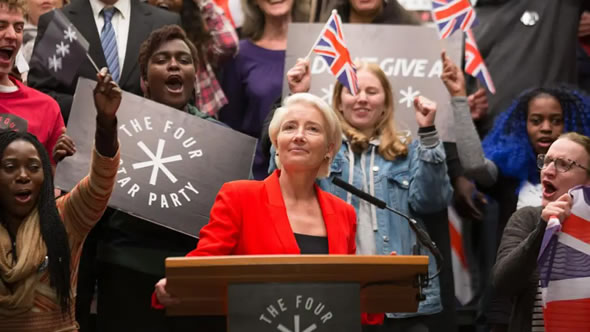 This six-episode BBC production centers on an extended family (which includes a celebrity turned politician played by Emma Thompson) in Manchester, England, beginning with one particularly important night in 2019—and then following them into the future over the next 15 years. (Spoiler alert: Trump gets re-elected.) The miniseries comes from Russell T. Davies (Doctor Who, Queer as Folk, and last year's A Very English Scandal) and also stars Anne Reid, Rory Kinnear, Russell Tovey, and Jessica Hynes (Spaced). Years recently began airing in the UK, where it received glowing reviews for its premiere episode.
Photo by BBC 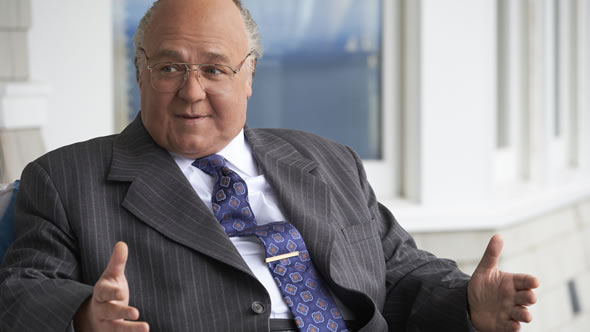 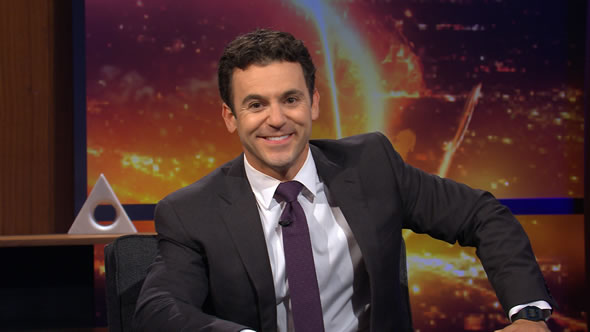 This spoof of television "aftershows" (like AMC's Talking Dead) finds Fred Savage and a panel of guests discussing each week's episode of The Flare, a fictional post-apocalyptic sci-fi series based on the (also nonexistent) book series The Moon Is the Sun at Night. Comedian Taylor Tomlinson is the co-host for the series, which will also feature fake set visits and interviews with Flare cast members. Best Coast serves as the house band.
Photo by FOX

Visit our TV Premiere Calendar for a complete, frequently updated listing of all upcoming TV debuts.

The Front Runner debuts June 15 on the Starz App

The Golem debuts June 26 on Netflix

The Hate U Give

Maria by Callas debuts June 3 on the Starz App

Spider-Man: Into the Spider-Verse

A Star Is Born