Metacritic Users Pick the Best of 2011

The results of our second annual user poll are in ... 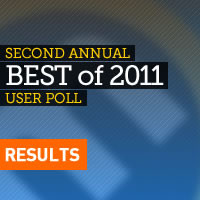 For the second consecutive year, we asked our users to vote for their favorite movies, videogames, TV shows, albums, and songs of the year. And, over the past month, 1,879 of you did just that. We asked users to list their five favorites of 2011 in each category, and then assigned a value of 5 points to each first-place vote, 4 points for second place, and so on down to 1 point for each fifth-place vote. The leading point-getters in each category are listed below.

For the first time, we also asked users to name the "most overrated" release of the year in each category, and those "winners" are also listed below.

It remains to be seen whether Nicholas Winding Refn's Drive will get any love from Academy voters, though the violent drama is doing fairly well on the awards circuit, and has appeared with regularity on critic top 10 lists. Metacritic users, however, see it as the clear #1 film of the year. Drive was named on 41% of all user ballots cast, and earned over 900 points more than the year's runner-up movie, critic favorite The Tree of Life.

Metacritic users actually agreed with professional critics on many of the year's best films; each group's consensus list of their 10 highest-ranked films shared six titles. Users preferred crowd pleases like the final Harry Potter installment, Midnight in Paris, Bridesmaids, and 50/50 more than critics did, while the professionals showed a greater preference for artier fare like Certified Copy, Take Shelter, The Artist, and the year's best-reviewed film, A Separation. (Admittedly, most of our users probably have not had a chance to even see the latter film; it opened just over a week ago and has yet to reach most cities.) The only two films in the users' consensus top 20 that rarely showed up on critic top 10 lists this year were X-Men: First Class and Source Code.

There were far fewer votes cast for the "most overrated" film of the year then there were for the year's best films, but two films appear in the top five in both lists (with the divisive Tree of Life unsurprisingly at the top). Note that for this and the other "overrated" categories, we asked users to list one title (rather than rank five titles in order), so the tallies below are simply the number of times each film was named by users.

While Batman: Arkham City narrowly edged out The Elder Scrolls V: Skyrim by a fraction of a point to take the official title of Metacritic's Game of the Year for 2011, our users preferred Skyrim, and by a wide margin. The latter was named on just over half of the ballots cast for games, while 43% of users listed Arkham City as one of their five favorites.

The latest installment in the Call of Duty franchise, meanwhile, fared relatively poorly with our users, barely cracking the top 10 in the best games list and scoring the most votes for the year's most overrated game.

* If a game has been released on more than one platform, the Metascores displayed are averages of the individual scores

The Metacritic community has spoken, and 2011's top television show was ... Community, though by the tiniest of margins. The NBC comedy—currently on hiatus, though it will return at some point this season—edged out critical favorite Breaking Bad by just two points even though each collected over 3,400 total points. Community, however, appeared on 859 (46%) of all ballots cast in the TV category, while Breaking Bad was named on 822 (44%) of the ballots submitted.

How did the users' overall list compare to the preferences of professional TV critics in their year-end top 10 lists? Critics rated the PBS period drama Downton Abbey, CBS' The Good Wife, and the departed Friday Night Lights more more highly than our users did. Metacritic users, meanwhile, seemed to like Showtime's Dexter and AMC's The Walking Dead more than the professionals. As a group, however, users seemed to share many favorite programs with the critics.

While Metacritic users are certainly not alone among TV viewers in feeling disappointed by the past season of Glee, we suspect that the same fans who elevated Community to #1 above were at least partially responsible for The Big Bang Theory's #2 finish among the year's most overrated programs (the two shows shared a timeslot last year).

This year, PJ Harvey's Let England Shake has dominated the music critics' top 10 lists for album of the year, while Tom Waits finished 2011 with the highest-scoring album of the year, Bad As Me. The latter album, however, failed to crack our users' consensus top 20, while PJ Harvey's disc finished third in voting. Metacritic users, it seems, preferred Bon Iver's self-titled release, by an almost two-to-one margin over the next leading point-earner, Adele's massive hit 21.

In addition to the Tom Waits album, other critic favorites that were absent from the users' top 20 included Black Up by Shabazz Palaces, David Comes to Life by Fucked Up, and Smoke Ring for My Halo by Kurt Vile. Metacritic users, meanwhile, seemed to like Radiohead's The King of Limbs and The Black Keys' El Camino more than critics did. However, seven of the users' top 10 picks were also in the critics' consensus top 10.

Fans of NBC's Community made themselves felt in our album voting as well, nearly pushing Camp by Childish Gambino (the recording name of Community star Donald Glover) into the top 20; with 262 points, it just missed, finishing at #21.

Yes, despite finishing #2 in points for the best album of 2011, Adele's 21 also topped the list of the year's most overrated albums. Adele is laughing all the way to the bank, though; 21 was the year's best-selling album by a huge margin. She's also the only artist to place two separate songs in our list of the 10 best tracks of 2011, as voted by Metacritic users. One of those songs, "Rolling in the Deep," actually predates 2011 by a month, but since it also appears on her 2011 album, we'll allow it.

Lana Del Rey's "Video Games" (certainly an appropriate enough song to appear on a Metacritic chart) isn't on any album, yet—it comes from her major label debut Born to Die, out later this month—making it the only non-album track to crack our top 10. And the overall #1 song among Metacritic users may seem like a bit of a surprise, since the French electronica outfit M83 is probably the most obscure band to place a song in our top 10. But "Midnight City" has already drawn acclaim around the web, topping lists of the year's best songs at several leading music publications (including Pitchfork and PopMatters).

What do you think of the consensus picks of your fellow users? Let us know in the discussion section below, and don't forget to visit our Best of 2011 section for all of our year-end coverage.