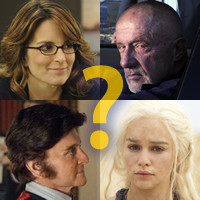 Once again, it's time to show off your TV knowledge by predicting the winners of the 65th Primetime Emmy Awards. Enter your picks in 22 major categories below; you may make a selection in as many or as few of those categories as you like. (And feel free to study this year's nominees in advance.)

Later, we'll tally your picks to come up with the consensus predictions in each category. After the awards ceremony (Sunday, September 22nd on CBS), we'll compare the Metacritic user consensus to the selections made by dozens of industry experts, to see who had the most accurate predictions.

Some rules and notes: You may vote only once. Voting will close at noon PDT on Saturday, September 15, 2013. We'll reveal your consensus picks (as well as those made by a variety of industry experts) on this site later that week, prior to the ceremony.

If the poll does not appear above, please go here to enter your picks.