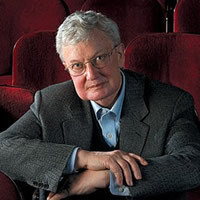 While his thumb would occasionally shift into the "down" position, there's no getting around the fact that Roger Ebert was a lenient grader.

The longtime Chicago Sun-Times film critic, who died last week at the age of 70 after a battle with cancer, used a four-star grading scale in his written reviews (as opposed to the binary thumbs up/down system that he and fellow critic Gene Siskel made famous on their At the Movies broadcasts). According to our statistics, those star grades were higher than those of his colleagues 75% of the time. Similarly, three out of every four Ebert reviews were positive—that's over 3,000 films in our database alone. His average grade was 71 (or nearly 3 out of 4 stars on his scale), over 12 points higher than the typical critic's average score.

But what might be considered grade inflation with another critic came across, from Ebert's keyboard, as genuine enthusiasm and appreciation for the craft of movies. His tastes ran both broad and deep, and his endorsements carried more weight because his writing was always approachable while also revealing an extensive knowledge and love of film. He was the rare critic that was both populist and Pulitzer winner, impressed equally by stunning, effects-heavy visual spectacles and more cerebral, dialogue-heavy affairs like the works of Neil LaBute and Todd Solondz (two among the many indie filmmakers whose films he often praised).

Judging from the response to his death last week, few critics over the past 30 years have influenced as many people. Not only was Ebert a truly invaluable supporter of smaller films that might not otherwise get noticed, but he influenced a new generation of writers to enter the field of film and television criticism. (For reactions from the critic community, see our roundup at the bottom of this page.)

Ebert's propensity for high review scores inevitably meant that he would champion films that were disliked (or at least, not praised) by a majority of other critics. Intriguingly, a look through our database reveals that in many of those instances, Ebert's opinions were much closer to scores given by Metacritic users than to those provided by other professionals. In both his grades and his writing, it seems, Ebert was able to speak both to and for the average movie fan, perhaps more so than his contemporaries. Fittingly, The New York Times obituary for Ebert is headlined A Critic for the Common Man.

Examples of cases where Ebert and his fellow critics strongly disagreed are listed below.

Before we get there, a personal note: Roger was a friend our ours, and a great friend and supporter of Metacritic over the past dozen years. We will greatly miss his encouraging emails. Very early in our development, Roger reached out to us to make a few specific recommendations on how we could improve our scoring system. For example, we originally used a single-digit scoring system for critic scores in our movies section, which forced us to round his 3-star scores to 8 instead of listing the much more accurate 75. This bothered Roger. "You're a 5-star site living in a 4-star world!" he told us.  Of course, he was right on the money, and we made the change. Roger will be missed.

Movies liked by Ebert and users, but disliked by most other critics

Here is a sampling of the many films—both mainstream crowd-pleasers and more obscure titles—where Ebert was in the minority for expressing a positive opinion: films where he graded three and a half stars (the equivalent of 88) or higher, but the Metascore was 60 or lower. All quotes come from his reviews; note that Metacritic user scores are on a 0-10 scale instead of a 0-100 scale. (And Ebert's scores are straight conversions of his star grades, where a full 4 stars = 100, 3 stars = 75, etc.)

Movies liked by most critics, disliked by Ebert

Yes, there were some (fewer, but some) cases where everyone seemed to like a movie but Roger Ebert. Here are some notable examples from our database:

Elsewhere on the web

The Chicago Sun-Times has a wealth of information about the man who spent 46 years there, including a tribute from Richard Roeper. The response from Ebert's colleagues in the critic community has also been overwhelming, with tributes from the likes of Scott Foundas (now at Variety), Michael Phillips of the Chicago Tribune, Slate’s Dana Stevens, the A.V. Club’s Scott Tobias, New York Times critic A.O. Scott, Rolling Stone's Peter Travers, Todd McCarthy of THR, Alan Sepinwall of HitFix, James Poniewozik of Time, the Huffington Post's Mo Ryan, and Kenneth Turan of the L.A. Times. Those are just a few of the hundreds of remembrances from friends and fellow critics. For video evidence of Ebert’s passion and influence, Indiewire highlights a video of Ebert defending director Justin Lin at Sundance in 2002, /Film has a series of At the Movies compilations, The Playlist includes a video of Siskel & Ebert discussing film criticism, and the L.A. Times gathers a few clips from YouTube (where there are thousands more to choose from). Director Steve James promised to complete Life Itself, a documentary on Ebert’s life that shares the title of his 2011 memoir, so fans can look forward to that. And Ebert's words should live on for quite some time at rogerebert.com.