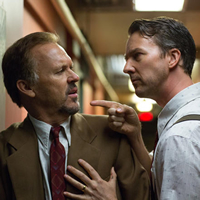 Though Richard Linklater's one-of-a-kind Boyhood had the early awards-season momentum (and in fact finishes the season with more best picture victories than any other film), the predictions turned out to be true: it was Birdman or (The Unexpected Virtue of Ignorance) that soared to a best picture victory at the 87th Annual Academy Awards.

In fact, Birdman fans got to see writer-director Alejandro González Iñárritu take the stage three times at last night's Oscars, while the film's cinematographer, Emmanuel Lubezki, collected a fourth trophy for the film. Wes Anderson's The Grand Budapest Hotel matched Birdman's year-high total of 4 wins, even with Anderson losing in the original screenplay category (in a slight upset) to the Birdman team. In all, however, there were few surprises in the ceremony, unless you had somehow predicted that it would conclude on schedule.

Scroll down the page to find reviews of last night's broadcast from a variety of TV critics, as well as a look at how well experts and Metacritic users did with their Oscar predictions this year. But before that, here is a complete list of this year's Oscar winners:

The winners and losers

Listed below are this year's winners in each of the 24 Academy Award categories, compared to the consensus predictions of industry experts (more on that below).

As you can see above, the experts we surveyed prior to the ceremony performed fairly well, with correct picks in 20 of the 24 Oscar categories—a success rate of 83.3%. That's just one correct pick short of last year's excellent 21-for-24 record. In the four categories the experts got wrong (original screenplay, animated feature, original score, and film editing), the Oscar went to the experts' #2 preference, so even there they weren't far off.

Out of the over 60 experts we surveyed, the most accurate were:

At the other end of the spectrum, the least accurate expert (among those making picks in all 24 categories) was:

As a group, Metacritic users performed far worse than the experts and matched their worst showing to date, correctly guessing just 14 of the 24 winners—a middling 58.3% accuracy rate. (Call it the Washington Post jinx.) Some of their misses came from supporting Boyhood too heavily, as our users had picked that film to win for best picture, director, and film editing. Last year, by comparison, Metacritic users had 20 picks correct (for an 83% success rate).

Oh, is it over yet? Last night's/this morning's broadcast (it ran for nearly 3 hours and 40 minutes, with the final award handed out past midnight on the East Coast) was again produced by Craig Zadan and Neil Meron, who received fairly abysmal reviews for their first Academy Awards ceremony in 2013 and only slightly better notices for last year's broadcast. Was the third time the charm? And how did Neil Patrick Harris perform during his first-ever Oscar-hosting gig? The answers to those questions appear to be not exactly, and not up to his usual high standards, respectively. Below are some of the comments from TV critics' morning-after reviews; click any link to read the full review.

Of course it was overlong, with the usual flabby middle made of niche awards and songs. But with the help of a charming host, a stage that was both grand and intimate, a few small scandals and errors, and one or two honest, rousing moments, it passed by with a minimum of pain.

Whether it was the barbed lines or three-plus hours of material that just grew flatter by the minute, Harris was a different figure from the fearless, amiable and funny emcee of multiple Tony Awards and other shows.

There were moments throughout tonight's show where it felt like not only hours were passing, but days, weeks and possibly epochs. ... No Oscar host bats a thousand — the show is too long and unwieldy and there's only so much the host can do after the first hour or so — but either the production consumed Harris, the writing failed him, or he picked a very strange night to go off-brand.

Harris played it like he was basically born to do it -- light on his feet working the crowd or at center stage without his pants, winkingly self-deprecating, moving-right-along when his prepared material didn't land (which was too often) -- and he now may have a job for life if he wants it. ... Not his fault that his material so frequently fell so very flat, and I'm looking at you predictions-box gag.

Somehow Neil Patrick Harris gave us both too little and too much in his first Oscar hosting voyage Sunday night.

Oscar nights almost always drag on too long, but this one was a slog almost from the very beginning.

Harris ... seemed unable to do anything with the format except do what hosts have been doing at the Oscars for years: struggle to get to "doing okay," lucky to be dismissed as kind of dull.

The best moments in the long Academy Awards telecast had nothing to do with host Neil Patrick Harris, who had a very off night. ... The music saved this Oscar telecast, but it was still a long, tedious show.

This was one of the least funny Oscars in recent memory.

As a TV broadcast, it struggled not just with length but tone, trying alternately to be light entertainment and a meaningful statement. Sometimes it was delightfully one, sometimes it was affectingly the other. But often the two collided painfully.

But for all Harris's skill and charm, the show too often pushed him past his abilities. He's not a comedian capable of making something out of nothing, which is what the script too often gave him, or of getting audience members to save a joke for him in the way that Ellen DeGeneres could.

Too much clunky scripted material flummoxed even Harris’ impish, good-natured charms. The Oscars are an unwieldy construct, but fleeting YouTube-worthy moments couldn’t overcome a telecast that played more than usual like a cheesy variety show interrupted by a celebration of movies.

Harris is the sort of guy who could probably host awards shows for a living, if there were enough of them to host, so we may be holding him to unreasonable standards. But for every twist of cheeky brilliance — much of the opening number, wandering out on stage in his underwear, the occasional zinger — he seemed a bit uneasy about just how much he could really stick it to the awards he was hosting. Many of his running gags, like a bit about his Oscar predictions, fell flat.

Neil Patrick Harris couldn’t deliver quite all the thrills needed to get through the three-hour, 38-minute Oscar folderol without a yawn.

Were you happy with the Academy's choices? What did you think of the telecast, and NPH as the host? Let us know in the comments section below.