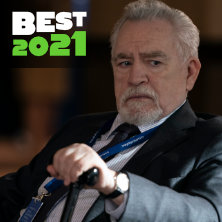 Below are the 130 individual top ten lists used to calculate the standings above. Some critics may list shows without ranking them in order; such lists are displayed below, without numbers, in alphabetical order. If a critic published multiple lists, only the most general list is included (e.g., a list of all shows rather than a list of new shows only). More specific lists (such as new shows only) were included as a last resort if a critic did not provide a more general list.

And don't forget to submit your picks for the best shows (and albums, movies, and games) of 2021 in our Best of 2021 User Poll.