Metacritic User Poll: Vote for the Best of 2022! 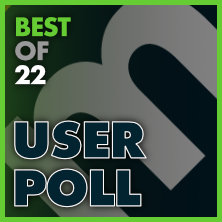 As we approach the end of the year we have been collecting picks by professional critics for the best movies, TV shows, and albums of 2022. Now, it's time for you to have your say.

For the 13th straight year, we're inviting all Metacritic users to participate in our year-end poll. Submit your picks for the best of the past year below, and, in early January, we'll tally the results and display the most-picked titles on our site. To determine the winners, we will use a simple scoring system, where all 1st place votes get 5 points, 2nd place votes get 4 points, and so on down to 1 point for each 5th place vote.

More of the year's best

See all of our previous best of 2022 coverage.