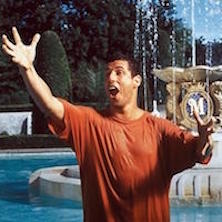 For the past 20-plus years, Adam Sandler has been churning out movies, whether you like it or not, almost every year.

With the release of 2017 comedy Sandy Wexler, Sandler has now starred in more than 30 movies since the ‘90s. And we’ve decided to rank every single one of them—yep, even You Don’t Mess with the Zohan—by their Metascores.