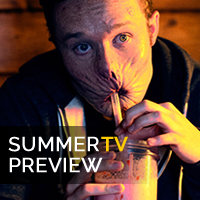 You may need to schedule some indoor time this summer, or at least clear out some space on your DVR. The coming months will see the returns of critical favorites such as Mr. Robot, You're the Worst, Orange Is the New Black, UnReal, and Difficult People, as well as the debuts of new series from Maria Bamford, Robert Kirkman, Baz Luhrmann, Seth Rogen and Evan Goldberg, and Cameron Crowe. Other newcomers include what could be HBO's best new drama in years, the most popular show in Italian TV history, and a remake of TV's most-watched miniseries.

We've picked out 23 key summer programs below. For information on other upcoming TV debuts, visit our TV Premiere Calendar.